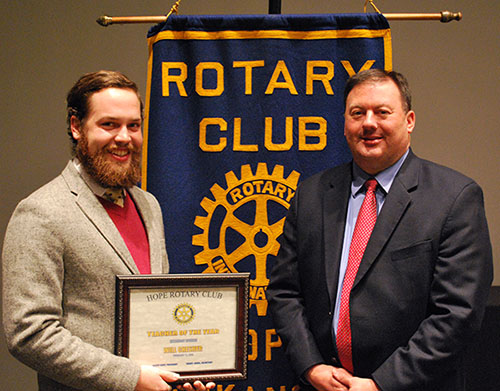 Will Chesher, left, receives the award presented by Bobby Hart, Hope superintendent and president of the Hope Rotary Club.

FAYETTEVILLE, Ark. – An Arkansas Teacher Corps Fellow in his second year was named Teacher of the Year by the Hope Rotary Club earlier this month.

Will Chesher teaches senior English at Hope High School. The College of Education and Health Professions at the University of Arkansas established Arkansas Teacher Corps two years ago to provide an alternative licensure program and place teachers in high-need schools in Arkansas.

The Arkansas Teacher Corps is currently recruiting for its next set of Fellows for the 2015-2016 school year. The final deadline to apply is March 1. The application can be found on the ATC webpage.

“Having Arkansas Teacher Corps Fellows in our schools has been a tremendous shot in the arm for us,” Hart said. “Education is a calling or a gift, and Will and the other ATC Fellows understand that combination of art and science that is required to be successful.”

Hope is in the midst of what Hart described as a one-to-one initiative in which every student is provided a piece of technology such as a Macbook or iPad. Hope High School’s enrollment for fall 2013 was 670 students.

“We are beefing up our instructional practice in regard to how we teach with technology and how we infuse technology into the classroom,” Hart said. “Will, his wife and our younger teachers step right into that mold and take on the challenge. They make technology a part of their classrooms. We are trying to get to the point where we can flip our classrooms around somewhat, where students do more of their investigative work and learning away from school and then come back to the classroom to talk about what they have learned. This is like second nature for the ATC teachers.”

Arkansas Teacher Corps addresses teacher shortages in high-need districts based on shortages in both geographic areas and specific content areas.

Tom Smith, dean of the College of Education and Health Professions, said Chesher’s award shows that Arkansas Teacher Corps is also doing well on its goal of giving bright, high-achieving people who earned degrees in fields other than education a chance to teach and share their knowledge. Chesher earned a bachelor’s degree in intercultural studies from John Brown University in 2013 and previously spent three summers working with children in low-income communities.

“We know we must constantly seek and implement new ways of serving the children of our state with the best teachers we possibly can provide,” Smith said. “Will is a fine example of what we hoped Arkansas Teacher Corps would do to benefit students and schools.”

Applicants to the program undergo a rigorous selection process where fewer than 20 percent of applicants are selected to become ATC Fellows. Those selected then participate in six weeks of intensive training, including hands-on teaching experience, during the summer and are matched with mentors who work with them throughout the school year.

Benton Brown, executive director of Arkansas Teacher Corps, spoke at the ceremony in which the Rotary Club honored Chesher and another Hope teacher.

“We knew from the beginning Will would be awesome,” Brown said. “He didn’t just want to teach. He wanted to inspire students to reach their true potential and find their gifts and passions and build on those.”

Brown told the group that everyone has a teacher who made a difference in their lives.

“Every doctor, lawyer, politician, scientist and president benefited from great teachers,” he said. “Will wrote a newspaper op-ed in which he said, ‘I wanted to be a firefighter, a psychologist, an explorer, a professional reader, and on some days, a rock star – and with teaching, I get to be all of those at once. I wanted to invest in people’s lives on a daily basis.’ ”

Brown told the Rotarians what he had learned from talking with other ATC staff and Chesher’s teaching colleagues at Hope.

“In the classroom, Will gives his students ownership and drive, steering the ship but embracing the need for students to get their hands dirty and remain self-motivated,” Brown said. “He sees literature as access to the world beyond the students’ own lives and does everything he can to transfer that feeling to his students.”