Water Mites: More to Them Than Meets the Eye 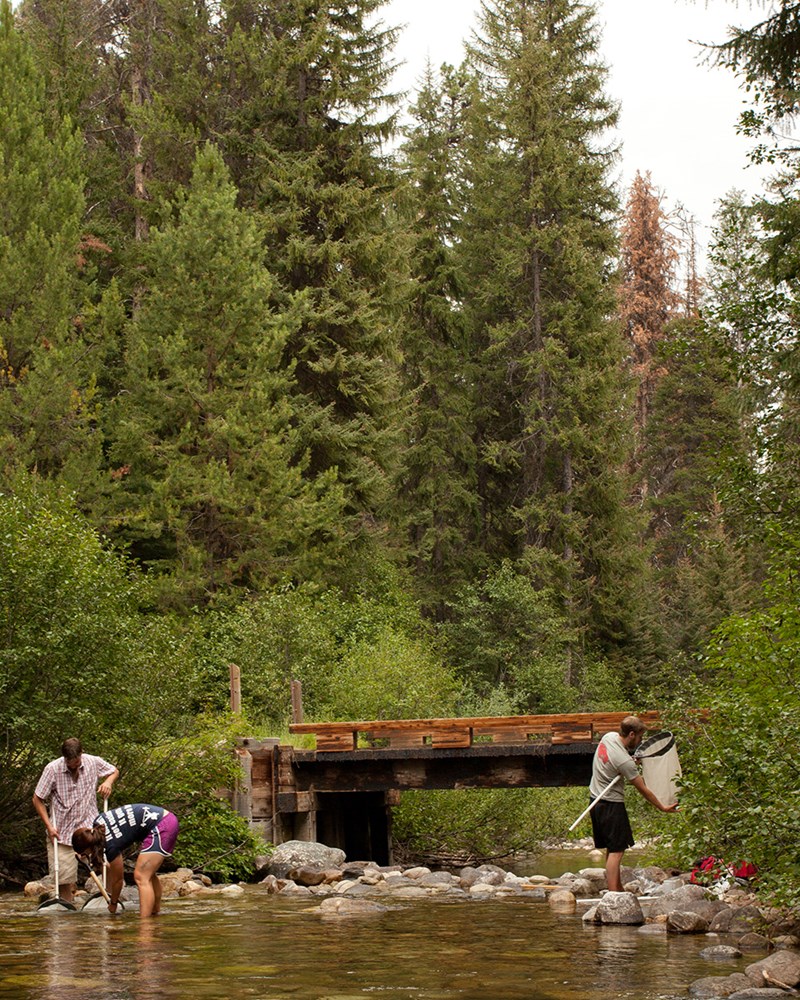 Graduate students Ray Fisher, Whitney Nelson and Joe O'Neill collect water mites from a stream in Montana during a 2012 excursion. They set two nets in the stream and dig just upstream of the nets so the water current carries sediment and organisms into the nets.

FAYETTEVILLE, Ark. – If you're swimming in pristine waters, chances are you're surrounded by a high diversity of water mite species. If you're in less than pristine waters, there might be even more water mites around, but fewer species of them. Ashley Dowling wants to find how and where they're thriving.

The lowly water mite, with a diameter of about 3 mm or less, can be found in a variety of waters: standing, flowing, shallow or deep. If the surface of a stream dries up, they can often be found in a gravel riverbed. "If there is water, there might be mites," said Dowling, an associate professor of entomology at the University of Arkansas System Division of Agriculture.

"Their influence on the structure and dynamics of aquatic communities is significant but underappreciated," said Dowling, "One of the things we're looking at is water mites as bioindicators of water quality." But Dowling emphasized that his research team must first document water mites' diversity in the U.S. and Canada. After that is accomplished, the stage will be set for using the data to determine water mites' role as water quality bioindicators.

Dowling, his co-investigator Andrea Radwell of the entomology research faculty and his research team are looking at this in a big way. He's about halfway through a five-year National Science Foundation grant of more than $725,000 to study the diversity of water mites in North America and train new specialists in water mite biology. It takes years to gather and analyze the data from different parts of the country, but the picture is coming together.

The water mite looks like a small aquatic spider. Sometimes it's a parasite that lives off insect hosts, and then it can become a predator on other small arthropods.

Evaluating the quality of freshwater streams is a major concern in Arkansas and elsewhere. The presence of three insect groups has been considered by scientists as an indicator of a stream's quality. The insects are large and easy to identify, but the smaller water mites take the task to another level. Researchers in Europe have noticed that water mites are more sensitive to changes in water quality.

"If phosphorous or nitrogen levels change a little bit, the mites tend to react faster than the aquatic insects that are commonly used," Dowling said. "The problem with mites is that they are much, much smaller. But they're extremely easy to identify once you have some tools at your disposal."

Further development of those tools is part of this project's mission. Dowling explained that because North American water mites have not been explored in depth as in Europe, they can't be used for water quality assessment. "If you go to any given stream, you really have no idea what to expect in terms of what should be there if it's a healthy stream or what it would look like if it were a contaminated stream."

So Dowling's team has been traveling to learn more about streams in different parts of the country and examine the diversity of water mites present. "Typically we sample what we consider some of the highest quality streams because in our project we're looking for diversity," he said. "We may be building the baseline for what a high quality stream is. Then we can monitor that and see how it changes."

Certain water mites are already known to thrive in poor quality streams, and any such stream probably doesn't have a diverse representation of water mites as a high quality stream would. The research team is exploring further to find out the level of water mites' diversity in streams that are at varying levels of degradation.

"We want to see how those stream communities change so you can catch it early as opposed to waiting until it's completely polluted," Dowling said.

The researchers are traveling coast to coast over the five years of the grant and are seeking to produce definitive monographs and data on the Torrenticolidae, the most common and abundant water mite family in U.S. and Canadian streams.

They've been to the northern Rockies, the Pacific Northwest and Alaska. In 2015 they'll visit Florida and Georgia. They chose these locations because those areas are the parts of North America that haven't already been covered by two veteran water mite researchers: Ian Smith, a Canadian in his 70s, and Dave Cook, an Arizona scientist in his 90s. These two leaders in the field are both winding down their activity and Dowling notes that points to a need to prepare a new generation of water mite research specialists.

Two doctoral candidates and one master's student are working with Dowling on the project. One of them, Whitney Nelson, a doctoral student, joined the effort as an ecologist who didn't have much experience with water mites. She aspires to an academic career and the work has raised her interest.

"Water mites are a cosmopolitan, understudied organism," Nelson said. "I hope to explore using mites as indicators for environmental health in the future."