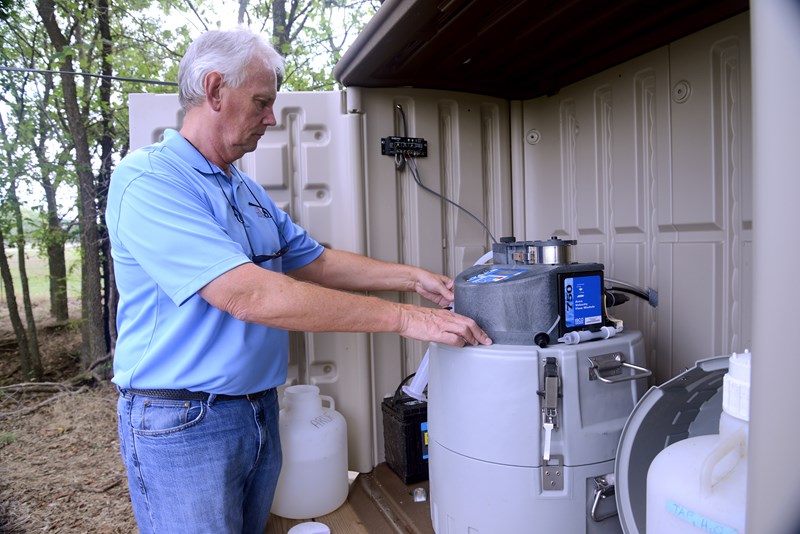 Andrew Sharpley, professor of crop, soil and environmental sciences, calibrates an automated water sampler for a sampling site along a stream in a farm field.

FAYETTEVILLE, Ark. — Bouncing along the edge of a field, Larry Berry points across the pasture toward a tree line marking the path of a creek bed. A small plastic shed sits atop a wooden platform on stilts.

"That's one of two monitoring sites on the creek," he said. "The other is upstream where the creek enters the property."

The two monitoring stations track water flow and any changes in water quality that may result from excess fertilizer washed off the pasture by rain.

Berry is a program technician working with Andrew Sharpley, professor of crop, soil and environmental sciences with the University of Arkansas System Division of Agriculture. Sharpley leads a division research team that is working with scientists from other state and national agencies to reduce the size and impact of a hypoxic zone in the Gulf of Mexico.

What Are Hypoxic Zones?

Hypoxic zones, also known as dead zones, are caused when excess nutrients in the water spur the growth of algae, which eventually dies and sinks to the sea floor. Bacteria feed on the dead algae and that activity depletes oxygen that is normally saturated in the water.

The resulting hypoxic zone has insufficient oxygen to support life and kills bottom-dwelling sea creatures that can't swim away.

The Gulf of Mexico hypoxia zone spreads out from the mouth of the Mississippi River and hugs the U.S. coastline. It averages about 5,000 square miles in area, but varies seasonally and from year to year. It is the largest hypoxic zone in U.S. coastal waters and the second largest in the world.

There are many nutrient sources, Sharpley said. Urban areas, septic and wastewater treatment systems, and agriculture can all contribute nutrients.

Rains wash excess nutrients into waterways that eventually flow into the sea. The Gulf of Mexico hypoxic zone is fed primarily by the Mississippi River, which drains about 40 percent of the U.S. land surface.

"Watersheds are naturally leaky," Sharpley said. "Whenever we change the land, say by urban development or with agriculture, we can increase the leakage of nutrients. However, you can't stop urban growth and everyone has to eat, so we need agriculture in the Mississippi River Basin."

Sharpley said it's important to emphasize that farmers don't want nutrients to run off their land. Nitrogen and phosphorus, whether from animal manure or commercial fertilizer, are valuable and often expensive resources. Nutrient loss from agricultural fields is costly.

Jeff Marley, a Washington County farmer, uses manure from his chicken houses to fertilize his cattle pastures and hay fields. What he doesn't need he sells to corn, soybean and wheat farmers in neighboring states.

"With the cost of fertilizer," Marley said, "you want to keep it on your land."

Sharpley said the U.S. Geological Survey conducted a modeling study in the late 2000s from which they ranked 42 watersheds, including two in Arkansas, as highest contributors of nutrients to the Mississippi River and the Gulf of Mexico.

"Arkansas farmers were disconcerted that they were rated higher than many other agricultural states in terms of contribution to Gulf hypoxia," Sharpley said. "But the model considers proximity to the Gulf to be important."

He said nutrients from sources farther from the Mississippi River or that are near the northern reaches of the river become diluted or filtered during their long transit to the Gulf. Arkansas' prime farmland is adjacent to the Mississippi and also near the Gulf.

"The high ranking doesn't mean Arkansas is leaking more nutrients than states that are ranked lower," he said. "We're just closer, so the model assumes it has a greater impact on the Gulf. This is why farmers are keen to be involved in this type of work and know exactly what is running off their fields."

What We're Doing About It

Berry and Sharpley calibrate an auto sampler in one of their monitoring sites to sip 100 milliliters of water per cycle. The device automatically collects water and measures flow rate during rain events, something that would be impossible for the scientists to do at all their sampling sites scattered around the state.

Sharpley and other Division of Agriculture researchers and extension specialists are working with federal and state agencies under the Environmental Protection Agency's Mississippi River/Gulf of Mexico Watershed Nutrient Task Force to assess Arkansas' nutrient contribution to the hypoxia problem.

"Nationally, the aim is to target critical areas of concern rather than to treat all areas the same," Sharpley said. "Locally, we're using precision instrumentation and laboratory analysis to build a more accurate base of documentation of Arkansas' nutrient loss to the Mississippi River Basin."

"We're monitoring impacts of the conservation measures in place and measuring their effectiveness at reducing nutrient loss," Sharpley said.

Using auto-sampling monitors like the one they were calibrating on Ron Morrow's farm in western Washington County, Berry can record and analyze any water quality changes that may take place in streams that run through farmland.

"A lot of research goes along with monitoring to develop best management practices," Sharpley said. "This work is advancing our understanding of these practices and their effectiveness in reducing nutrient loss."

The division's research and extension efforts are done in concert with farmers through such programs as Discovery Farms, co-directed by Sharpley and extension water quality specialist Mike Daniels, where the results can be measured on working farms and evaluated for practicality and effectiveness. There are nine Arkansas Discovery Farms in the hypoxia study — three animal operations, including Marley's and Morrow's farms in Washington County, and six row crop farms.

Marley said the best management practices he's put in place, based on Division of Agriculture research, have made a difference in his operation. Soil tests have shown elevated nutrient levels in his fields, so he only applies chicken manure to his land once every three years. The rest is sold to row crop farmers in Kansas, Missouri and Oklahoma.

Marley's row crop customers also want to know what they're paying for. "A decent set of records on nutrient content is necessary," he said.

Sharpley said Arkansas has made notably more progress in these areas of research and development than other states with similar programs. The results have drawn the interest of the EPA in what the state is doing.

"Arkansas has a good handle on the issue and so the state is getting a disproportionately high percentage of the research funds," Sharpley said. "We're farther along than some other parts of the U.S. and NRCS, EPA and other agencies are keen to better understand the keys to our success, in order to extend what we've done to other areas of the country."

Sharpley said it's doubtful that hypoxic zones could ever be eliminated and no one knows how large the hypoxic zone was a century ago. As he noted, watersheds are leaky by nature, and are too many sources of nutrient loss besides agriculture.

But research, development and demonstration of improved management practices is aimed at encouraging wider adoption, reducing the size of the zones and mitigating the resulting environmental and economic losses.

"What we may be looking for," he said, "is what level of hypoxia we can live with and what it will take to achieve it."