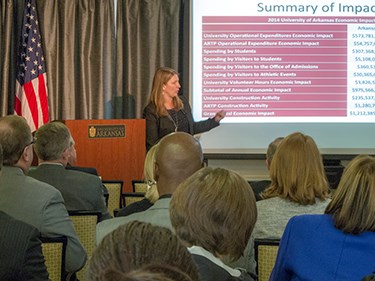 Kathy Deck, director of the Center for Business and Economic Research

FAYETTEVILLE, Ark. – The economic impact of the University of Arkansas on state and local economies has grown from $725 million in 2009 to $1.2 billion in 2014, a 66 percent increase, Chancellor G. David Gearhart announced during a news conference Feb. 10. That figure comes from a report prepared by researchers in the Center for Business and Economic Research at the Sam M. Walton College of Business. The center previously prepared an economic impact report for the university in 2009.

“Perhaps the most impressive finding is the return-on-investment that Arkansas taxpayers get from the state’s investment,” said Kathy Deck, director of the Center for Business and Economic Research, and principal author of the study. “The state’s appropriation to the university in 2014 was $173.8 million. Arkansas is basically getting back almost $7 for every dollar the state legislature invests in the University of Arkansas.”

The center’s researchers again found that the university has both short-range and long-range effects on state and local economies by developing human capital, fostering a knowledge economy and providing a sustainable economic base for growth in Northwest Arkansas and the state as a whole.

“This report gives us empirical data showing the University of Arkansas’ considerable economic impact on the state of Arkansas, showing that the institution is a force for improving the lives of our citizens,” said Gearhart. “The researchers have found a direct correlation between our growth and how that growth positively impacts Arkansas.”

During 2014, spending by students contributed $307.4 million to the economy in Northwest Arkansas, and spending by campus visitors added another $35.8 million. The student spending was determined through a survey of a representative sample of the student body – 2,600 of the 26,200 enrolled in the fall. While student spending is allocated to a variety of categories, the largest monthly expenses of students were rent, restaurants and bars, and motor vehicle-related purchases.

“The University of Arkansas has been a key driver of Northwest Arkansas’ economic success these past two decades,” said Mike Malone, president and CEO of the Northwest Arkansas Council. “The U of A contributes to our economy in so many ways – as one of our largest employers, through direct investment and purchasing, by preparing our future workforce and conducting innovative, job-creating research – these are just a few examples.”

Visitors to Razorback athletic events, the U of A admissions office and students contributed $35.8 million in spending in 2014 and the economic impact generated by university-affiliated volunteers is $3.8 million.

The operations of tenants in the Arkansas Research and Technology Park add nearly $38 million to the regional economy.

“Research continues to drive the growing knowledge-based economy in Arkansas,” said Jim Rankin, vice provost for research and economic development. “Faculty innovation and expertise can spin off viable processes, products and services, which translate into new businesses and jobs and boost the economy.”

In terms of sustainable economic growth, the study finds that the university, one of the largest employers in Northwest Arkansas in 2014, had a total payroll of $317.9 million.

“The activities associated with the university’s annual operations more than add up to the total of $1.2 billion annually,” said Deck. “But the total impact is 2.7 times greater than the funds the university directly spends each year.”

The report was first commissioned in 2009 by Chancellor Gearhart, and then again in 2014. The center researchers spent four months (September 2014 to January 2015) preparing the report.

Deck joined the Center for Business and Economic Research in 2001, and has managed 99 economic studies for clients that include various counties and municipalities across Arkansas, Arvest Bank Group, Chesapeake Energy, the Jones Center for Families, the Arkansas Economic Development Commission, and Bikes Blues and BBQ.