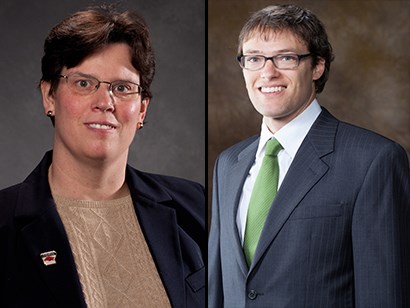 FAYETTEVILLE, Ark. – The National Institute of Neurological Disorders and Stroke of the National Institutes of Health has awarded $375,000 to researchers at the University of Arkansas who are investigating the interplay of two types of signaling in the brain.

Woodrow Shew, assistant professor of physics, and Julie Stenken, professor of chemistry and biochemistry, are the co-principal investigators on the grant.

The constant exchange of chemical and electrical signals among neurons in the cerebral cortex is responsible for our thoughts and actions. Understanding the interplay of these two types of signaling is essential for insight into neurodegenerative diseases like Alzheimer’s and Parkinson’s as well as healthy brain function.

Under the grant, Shew, a biophysicist, and Stenken, an analytical chemist, will develop new tools which – for the first time – will measure changes in the electrical signals due to carefully controlled and measured changes in chemical signals within a neuronal circuit.

The expertise of Shew’s group is in measuring the electrical signals of neurons during sensory information processing using implanted microelectrode arrays. Stenken’s research group specializes in precise control and measurement of chemicals in the brain using microdialysis implants.

Combining the tools and skills of the two labs promises to advance the frontiers of brain research in new directions that would be impossible without such interdisciplinary collaboration.

Shew said, “The status quo for research on how chemicals like acetylcholine affect brain function is to dump a bit of the chemical on the part of the brain you are studying and ask, ‘How does the electrical activity change?’ Our measurements of electrical signals are state-of-the-art and quite precise, but our typical chemical manipulations have been relatively crude and imprecise.”

“With microdialysis probes we can control exactly how much acetylcholine or other chemical is released and can therefore affect the localized chemical gradient in different ways,” Stenken said.

Previous studies of how neuroactive chemicals affect brain function have often ignored the fact that these chemicals are not likely to be dispersed uniformly across the brain. Rather, it is likely that the chemicals are more concentrated in some regions than in others. Understanding the effects of such heterogeneous distribution of chemicals such as acetylcholine may be particularly important for gaining insight in diseases like Alzheimer’s, which is associated with the loss of neurons that produce acetylcholine.

Neuroactive chemicals play an important role in practically every aspect of brain function. This work may have far reaching implications for understanding other disorders, including Parkinson’s, depression and more.

“We expect that this is just the beginning of a long term collaborative effort to get a deeper understanding of how the spatial patterns and dynamic changes in the chemical environment in the brain impacts how our senses work,” Shew said.

Stenken said that the review panel for the National Institutes of Health was enthusiastic about their team and their approach. One of the reviewers described the project as, “commendably systematic, … supported by the impressive talents of the solid investigative team.”

Shew joined the faculty of the Department of Physics in 2012.  Stenken is a faculty member of the Department of Chemistry and Biochemistry since 2007 and holds the university’s Twenty-First Century Chair in Proteomics. Both teach and conduct research in the J. William Fulbright College of Arts and Sciences.