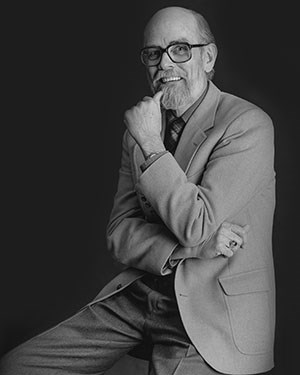 “Miller Williams was an icon among our academic community,” said U of A Chancellor G. David Gearhart. “He was an amazing teacher and extraordinary writer and poet. His presence was felt across campus and indeed the entire state. Our nation has lost a true talent and an incredible human being. We mourn the loss of this exceptional person who brought joy and light to so many.”

Williams wrote 37 books of poetry, fiction, criticism and translations. His work was highly regarded by his literary peers around the world, but his public fame came as the result of friendship and family. He first came to the nation’s attention in 1997, when President Bill Clinton asked him to write and read a poem, “Of History and Hope,” for Clinton’s second inauguration. Clinton and Williams taught together at the University of Arkansas, and Williams worked in Clinton’s first political campaign.

The father of three children, Williams also enjoyed a degree of celebrity as “Lucinda Williams’ dad,” after her musical career gained national success. He appeared with the singer/songwriter in several concerts, reading his poems between her songs. On her most recent album, Down Where the Spirit Meets the Bone, she adapted one of his poems, “Compassion” for the lead song. The album title is taken from the last line of that poem. She also held benefit concerts to establish the annual Miller Williams Poetry Prize.

Williams came to the University of Arkansas in 1970, as a member of the Department of English in the J. William Fulbright College of Arts and Sciences. He joined the graduate program in creative writing and later launched the program in translation. In 1980 he joined with Rainer Schulte and Lesley Wilson in establishing the American Literary Translators Association.

“As a poet, a translator, a teacher, Miller Williams helped shape our creative writing program,” said Davis McCombs, associate professor of English and director ofthe program. “He established our degree in literary translation — still considered one of the most innovative features of our program — and he brought our university and our state to the national stage. It’s remarkable that this writer — a poet of the local and of the personal — came, in the course of his illustrious career, to speak for the nation. It confirms, I think, the humility and compassion and great resonance of his work to our daily lives. Our program, indeed Arkansas itself, owes much to Miller’s voice and vision.”

As a professor and publisher he nurtured hundreds of young poets, most notably former U.S. Poet Laureate Billy Collins. As director of the UA Press, Williams published Collins’ first book, The Apple That Astonished Paris. Collins has referred to Williams as a mentor, and “his first editorial father.”

The poet Jo McDougall was a student of Miller’s in the creative writing program, and he published two of her books with the UA Press.

“I was deeply privileged to have had Miller as a mentor, editor, and friend for over thirty-five years,” she said. “He was a genius teacher who articulated ideas about poetry that I use every day in my writing. He was also a truthful but sensitive editor. I think that, for a writer, having a good editor is second only to having good parents. I had both.”

Williams also became friends with former President Jimmy Carter, encouraging him in his writing of poetry, which led to UA Press publication of two books by Carter and one by his wife, Rosalynn Carter. More often, though, the books published by the press were in line with the traditional academic pursuits of Arkansas writers, who sought to explain the culture, place and history of Arkansas.

“As the founding director of the press, Miller made an enormous impact on our state and region, and the world of scholarship and literature,” said Mike Bieker, director of the UA Press. “I will miss him, and I know that sentiment is shared by many.”

“It would be hard to overstate the importance of Miller’s role in the establishment of the University of Arkansas Press,” added Roy Reed, professor emeritus of journalism and a long-time colleague at the university. “The ongoing success of the press is in some ways a tribute to Miller’s foresight. It might never have occurred to me, an old newspaperman, that I might be interested in writing books. Miller put the notion in my head, and I am grateful.” The UA Press has published four of Reed’s books.

William’s many honors include the Henry Bellman Award, the Amy Lowell Traveling Poetry Fellowship, a Fulbright professorship at the National University of Mexico, the Prix de Rome for Literature, the John William Corrington Award for Literary Excellence, the National Arts Award, and the Lifetime Achievement Award in Writing, given  by the Porter Prize Foundation.

Williams is survived by his wife, Jordan, and three children, Lucinda, Robert and Karyn.

A memorial service is being planned for the spring.

In lieu of flowers the family is asking that memorials be sent to either: Miller Williams Poetry Series, UA Press, McIlroy House, 105 N. McIlroy Ave. Fayetteville, AR 72701  or to the Harrison/Whitehead Memorial Endowment, Fayetteville Community Foundation, P.O. Box 997 Fayetteville, AR 72702. The endowment provides scholarships for the U of A MFA program.