Bob Woodward to Speak at U of A, Fayetteville Public Library 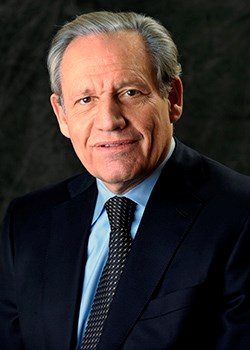 Woodward will also speak at 7 p.m. Friday, April 10 at the Fayetteville Public Library as part of the FPL Author Series. Both appearances are free and open to the public.

Woodward and Carl Bernstein were the main reporters for the Washington Post during the Watergate scandal, for which the Post won the Pulitzer Prize in 1973. They co-authored two books on the scandal, All the President’s Men and The Final Days. Woodward was the lead reporter for the Post's articles on the aftermath of the September 11 terrorist attacks that won the National Affairs Pulitzer Prize in 2002. He has written 17 best-selling books based on his reporting and is currently an associate editor for the Post.

“No living reporter has had greater impact on informing Americans about political culture in our country than Bob Woodward,” said Larry Foley, chair of the Lemke Department of Journalism.  “Having Mr. Woodward come to our town and our campus is monumental for our students, faculty and community. His visit coincides with the 60th anniversary of Journalism Days at the University of Arkansas, and we could not ask for a keynote speaker with more prestige and clout.”

Woodward’s most recent book, The Price of Politics, is based on 18 months of reporting and is an intimate, documented examination of how President Obama and the highest profile Republican and Democratic leaders in the United States Congress attempted to restore the American economy and improve the federal government’s fiscal condition.

“We are happy to partner with the university’s Distinguished Lectures Series committee to bring one of the most eminent journalists of our time to Fayetteville,” said David Johnson, executive director of the Fayetteville Public Library. “This is an example of Town and Gown working together to increase our community’s access to exceptional speakers.”