U of A Graduate Wins Prestigious Milken Educator Award for Work as Alaska P.E. Teacher 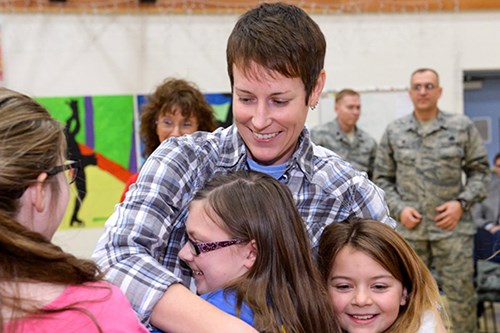 Jenna White won a $25,000 Milken Educator Award for her work as a physical education teacher in Alaska, where she teaches everything from ice hockey and cross-country skiing to team sports such as baseball and basketball.

“I had no idea I was going to get the award,” White said she remembered thinking at a school assembly on the U.S. military base where she teaches. “We were told we were having an assembly for the Alaska commissioner of education to talk to students about respect. I was completely shocked, humbled and honored. I feel like I work with really great staff so it was very humbling to stand up there and receive the award.”

Milken Educator Awards, dubbed the Oscars of teaching, are given to reward and inspire excellence in the world of education. In addition to the $25,000 unrestricted cash prize, winners receive access to powerful networking and development tools throughout their careers in education. The awards target early- to mid-career education professionals for their already impressive achievements but also for the promise of what they will accomplish in the future.

“As a P.E. teacher, it’s really special,” White said. “There are a lot of poor examples of P.E. out there and I try not to be one of those. Being physically active is important on its own, but I also want to enhance the ability of students to succeed in the classroom.”

White said she learned at both UCA and the U of A the importance of being an advocate for high-quality physical education in schools.

“I try to be that voice for physical education,” she said.

White began teaching in Alaska in 2008 after one year teaching at a school in central Arkansas. Children in Alaska go outside for recess in the winter until the temperature reaches minus 20 degrees, she said.

“I wanted to be in a state that really valued physical education and there are districts in Arkansas that do but the jobs are hard to get,” she said. “My internship supervisor at UCA heard that Alaska had increased the number of minutes of P.E. required per week from 60 to 90 and that jobs were opening up. I thought, why not? If I’m going to move, I wanted to go somewhere completely different.”

The severe weather is not a factor, White said.

“We get out and enjoy the snow,” she said. “We’re on a military base so kids are with us for just three to four years. They need to know they don’t have to be stuck inside. There are cross-country skiing trails and outdoor skating rinks all through the city, plenty of opportunities for recreation. I get kids from all over the world. It’s fun because some of them may have lived in a warm climate their whole life. When they get on skis or ice skates for the first time, it’s really exciting.”

White said she plans to use her prize money to pay off some student loans, invest some and take a long trip this summer in a travel trailer she recently bought. She plans to go from Alaska to northern California and then to several national parks before flying to Arkansas for a visit.

In 2013, the Alaska affiliate of the American Alliance for Health, Physical Education, Recreation and Dance named White the Physical Education Teacher of the Year. She was also named the College of Education and Health Professions outstanding master’s student in physical education in 2012.

She chose to enroll in the online master’s program in 2010 because she had always wanted to attend the University of Arkansas.

“I’m a huge Razorback fan and kind of regretted I didn’t go to the U of A,” she said. “It always stuck with me that if I had the opportunity I would take it.”

Doing the online degree program was a great fit for her schedule, White said, and the professors were good to work with. There was also opportunities to collaborate with other students, she said.

“My personal philosophy is to teach kids how to be physically active and to be healthy,” she said. “I want to give them the skills they need and expose them to a variety of activities. I hope they find something that motivates them for lifetime, that is fun and that they can do with friends. There is a huge social-emotional piece in physical education. We are constantly promoting opportunities for kids to build confidence and not to be afraid to try new things. P.E. is the best place to learn those skills and a positive attitude that is crucial to success in life.”

All online degree programs offered by the University of Arkansas are showcased at http://online.uark.edu.