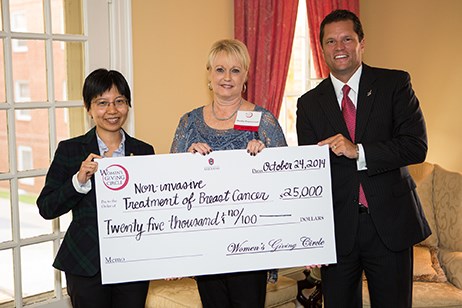 FAYETTEVILLE, Ark. – The Women’s Giving Circle awarded $140,000 to nine University of Arkansas programs at its annual voting event on Friday, Oct. 24 – a record amount of funding since the circle’s inception 12 years ago. The recipients this year represent the most geographically diverse group of projects in the organization’s history.

The circle also surpassed Chancellor G. David Gearhart’s 2013 challenge to increase its membership by rising to 127 members this fall. 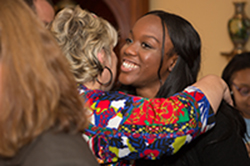 The Women’s Giving Circle is made up of U of A alumni, faculty, staff and friends of the university and was created to encourage women as philanthropic leaders. The circle raises funds in part by requiring annual cash gifts from its members. The annual gift requirement is $1,000 for alumnae or friends and $500 for recent graduates, students, faculty and staff.

This year’s grant recipients were chosen from 51 proposals, with 11 finalists selected through an online vote.  Women’s Giving Circle members heard presentations from the finalists as part of today’s voting event, and then chose the winning programs. The amounts of the nine grants given out this year ranged from $5,000 to $38,500.

“I greatly admire this group’s commitment to philanthropy on the University of Arkansas campus,” Chancellor Gearhart said. “They have met every membership challenge they have been given and have grown into a notable funding source for innovative programs and research. Their work is an excellent example of how investing in the University of Arkansas can impact the entire state. The ideas, people and projects may start in Fayetteville, but the results can be seen all over Northwest Arkansas, the Delta and even nationally through some of our faculty research. It has been wonderful to see the Women’s Giving Circle’s growth over the last 12 years.”

The programs that received awards this year include:

Because the Women’s Giving Circle met the challenge made by Gearhart in 2013, the circle received an additional $50,000 donation toward its total giving pool. The total giving from the circle now stands at nearly $900,000 since its inception.

“Giving back is what the Women’s Giving Circle is all about,” said Haguewood. “We love seeing the positive impact our grant recipients are making on the University of Arkansas campus and feel good knowing that our donations are being used to support the university’s mission and vision. Every woman in the circle has a voice and our voting event gives them the opportunity to share that voice and have a say in how our collective funds are spent. It’s an exciting process.”