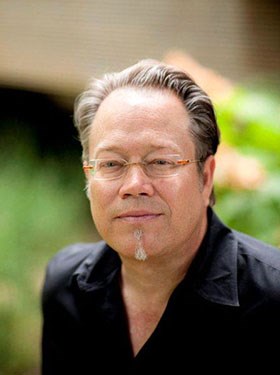 Marlon Blackwell, Distinguished Professor and head of the Department of Architecture in the Fay Jones School of Architecture, was named a 2014 Ford Fellow by United States Artists.

FAYETTEVILLE, Ark. – Marlon Blackwell, Distinguished Professor and head of the Department of Architecture in the Fay Jones School of Architecture, has received a $50,000 fellowship grant from United States Artists, a national grant-making and advocacy organization.

United States Artists awards several fellowships each year, under names such as Ford, Rockefeller and Knight. Blackwell, who was awarded a Ford Fellowship, is one of 34 artists to receive a 2014 United States Artists fellowship. The Fellows were selected from 116 nominated artists living in the United States and Puerto Rico and were chosen by a panel of expert peers in each artistic discipline. Blackwell, honored in the Architecture and Design category, is a nationally and internationally recognized teacher and one of the nation’s most respected regional modernist architects. He is founder and principal at Marlon Blackwell Architects, based in Fayetteville.

“This is not only a recognition of the work that I’ve been fortunate to be able to produce over the past 20 years,” Blackwell said. “I think it also is a great reflection of those who are around me, helping me to realize this work, which includes my partner, Ati Johari Blackwell, and my staff. And, of course, I have received tremendous support and confidence over the years from the University of Arkansas. Without all of that, this recognition might be possible, but it would be very difficult.”

Blackwell is the second faculty member from the Fay Jones School to receive this prestigious honor from United States Artists. Steve Luoni, director of the University of Arkansas Community Design Center and a Distinguished Professor, was named a Ford Fellow in 2012. The Fay Jones School joins the ranks of Columbia University, the University of California, Los Angeles and Southern California Institute of Architecture for having multiple members of their faculty selected in the USA Fellows program since it began in 2006.

“My congratulations to Professor Blackwell,” said Dean Peter MacKeith. “The Fay Jones School is privileged by a talented and dedicated faculty in architecture, landscape architecture, interior design and urban design. Professor Blackwell’s recognition as a 2014 USA Ford Fellow, together with Professor Luoni’s earlier recognition, is further confirmation of the exceptional quality of their professional and academic work. The school is proud of their appointments and honored by their achievements.”

Blackwell said that just about every image in his project portfolio for the USA Fellow grant showed the places he has traveled nationally and internationally. In his proposal, he suggested that he use the grant money to continue to generate design ideas through travel to various locales, and even take along those who work with him.

These experiences will help them also understand what has been integral to his design work: the power of place and local building cultures.

“I will continue to use that as a way to inform my imagination. It’s very stimulating to the variety and the similarity that people find in my work,” he said.

Blackwell’s practice takes place primarily in Arkansas and combines vernacular traditions with rigorous formalism. Throughout his body of work, nature has been a persistent inspiration and he strives to create spaces that respond to the physical and cultural eccentricities of a place. Working in the second poorest state in the country, Blackwell’s architecture uses an economy of means for a maximum of meaning and he makes spectacular buildings with very small budgets.

A professor in the Fay Jones School for more than 20 years, he teaches fifth-year design studio, technology and design detailing. In 1994, he co-founded the University of Arkansas Mexico Summer Urban Studio, which is taught at the Casa Luis Barragan in Mexico City. He became head of the Department of Architecture in fall 2009.

His firm’s projects have won many awards. The St. Nicholas Eastern Orthodox Church in Springdale won a 2013 national American Institute of Architects Honor Award and was named the top Civic and Community Building in the 2011 World Architecture Festival. In 2012, the Ruth Lilly Visitors Pavilion at the Indianapolis Museum of Art won an American Architecture Award from the Chicago Athenaeum, an AIA Honor Award, an Indiana AIA High Honor Award and a Gulf States Regional AIA Honor Award.

His firm was lead architect on the renovation of Vol Walker Hall and the addition of the Steven L. Anderson Design Center – home to the Fay Jones School. Accolades for that project in 2014 include a Gulf States Region AIA Honor Award, AZ Award for Best Commercial/Institutional Architecture (over 1,000 square meters), Architect’s Newspaper Building of the Year, Lumen Award for Excellence and LEED Gold certification.

This year’s USA Fellow recipients are based in 13 states and represent the most innovative and influential artists in their fields. Reflecting the diversity of artistic practice in America, they include cutting-edge thinkers and traditional practitioners from the fields of architecture and design, crafts and traditional arts, dance, literature, media, music, theater arts and visual arts.

A celebration of the fellowship recipients will be held in March in Chicago.

Founded in 2006 by the Ford, Rockefeller, Rasmuson and Prudential Foundations with $22 million to support artists in America, United States Artists is currently funded by a broad range of philanthropic foundations and individuals. Since inception, through its signature USA Fellows program, the organization has distributed $19.1 million in support to 405 artists in 46 states and Puerto Rico. These fellowships are awarded to artists at all career stages who demonstrate artistic excellence, unique artistic vision and significant contributions to their fields.

For more information about the 2014 USA Fellows, visit http://www.unitedstatesartists.org/.