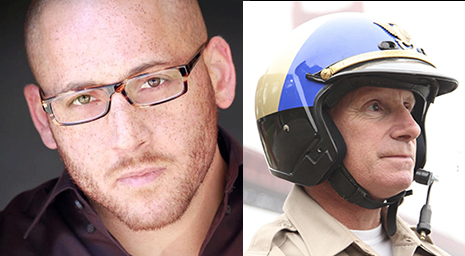 FAYETTEVILLE, Ark. – Kevin Hines and Kevin Briggs will bring their personal stories to the program “Call For Hope: Promoting Suicide Prevention” at 6:30 p.m. Wednesday, Oct. 8, at the Fayetteville Town Center. Doors open at 5:30 p.m. The event is free, open to the public, and no tickets are necessary. Free shuttle bus service will be available from the Union Bus Station on Garland Avenue starting at 5 p.m. and running back to campus after the lecture.

Kevin Hines is author of the personal memoir Cracked But Not Broken: Surviving and Thriving After a Suicide Attempt. He is one of the few people to jump from the Golden Gate Bridge and survive. He recalls his first thought after jumping was “I don’t want to die.” He was seriously injured recovered and dedicated his life to working for suicide prevention.

Hines is profiled in the documentary The Bridge, which will be a shown at 8:05 p.m. Tuesday, Oct. 7, in Hillside Auditorium. Admission is free.

Kevin Briggs is a retired California Highway Patrol sergeant who earned the nickname “Guardian of the Golden Gate” for helping convince people not to jump from the San Francisco Bridge on more than 200 occasions. He patrolled the bridge for 23 years and was known for his patience, commitment and ability to convince people not to jump. Since retiring he has become a leader in promoting suicide intervention and prevention, crisis training and management worldwide.

The event is the second in this year’s University of Arkansas student Distinguished Lecture Series. The lecture is co-sponsored by the U of A Social Work Department, the Social Work Student Organization Phi Alpha and the Northwest Arkansas Suicide Prevention Coalition.

Hines and Briggs  have appeared in programs together for several years, sharing their experiences and perspectives, with messages that resonate with both people who have thought of suicide, and people who seek ways to prevent it.

The Distinguished Lecture Series is a student-sponsored program. Speakers are chosen by a committee of students, faculty and staff, and the events are funded by a student-approved fee, appropriated by the Programs Allocation Board.