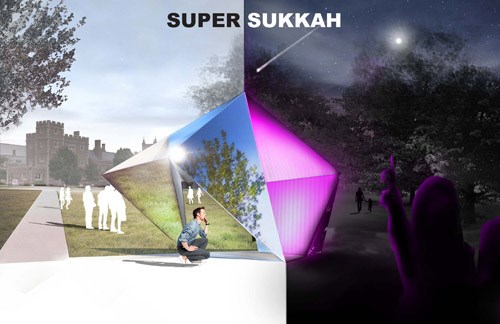 The Super Sukkah was among the designs selected in the competition, "Sukkah City STL 2014: Between Absence and Presence."

FAYETTEVILLE, Ark. – Marc Manack and Frank Jacobus, both assistant professors of architecture in the Fay Jones School of Architecture and co-principals of the architecture firm SILO AR+D, have won an award for their project, the Super Sukkah.

Their project was one of the 10 cutting-edge sukkahs selected in the competition, “Sukkah City STL 2014: Between Absence and Presence.” The 10 winning projects, chosen from a field of 33 entries, were created both by individuals and teams of architects and designers from around the country. The winning projects of the competition will be on display from Oct. 7 to 12 at Washington University in St. Louis. Each winning entry receives a $1,000 honorarium to defray construction costs.

The Sukkah City STL is an ambitious contemporary design competition presented by St. Louis Hillel and the Sam Fox School of Design & Visual Arts at Washington University. The competition challenged the participants to reimagine the traditional Jewish sukkah, a small, temporary structure erected each fall during the weeklong festival of Sukkot, through the lens of contemporary art and architecture.

The Super Sukkah design by Manack and Jacobus translates the Star of David into a three-dimensional shelter with a distinct day and night presence. Just as the traditional sukkah was covered with materials that once were organic but have become disconnected from the Earth, the Super Sukkah’s daytime presence disconnects the slowly evolving characteristics of the organic materials in its immediate environment through the act of surface reflection. The daytime phenomenon signifies an environmental absence as the Super Sukkah becomes a chameleon that reflects the nature of its surroundings.

The designers said that the nighttime presence of the Super Sukkah is a geometric inversion that provides a new figural character defined by the illumination of the interior surfaces into Citron, Palm, Myrtle and Willow – four plant species important to Sukkot. These colored lights become a campus lantern whose figural presence glows from the energy gathered on one of the Super Sukkah’s photovoltaic surfaces.

Manack and Jacobus’ Super Sukkah employs reflection (absence) and transmission (presence) as both an embodiment of the sukkah’s rich cultural heritage and as a reinterpretation of its continued meaningfulness in the 21st century.

An opening ceremony for the installation of the winning projects will take at 5:30 p.m. Tuesday, Oct. 7, in Umrath Lounge on the Danforth Campus of Washington University. The projects will remain on display for viewing through Sunday, Oct. 12. Tickets to the reception are $36 and can be purchased through St. Louis Hillel. Organizers will also host a free Sukkah City STL Community Open House from noon to 2 p.m. Sunday, Oct. 12. Following the exhibition in St. Louis, the Super Sukkah design will return to Fayetteville and be displayed on the lawn of Vol Walker Hall.