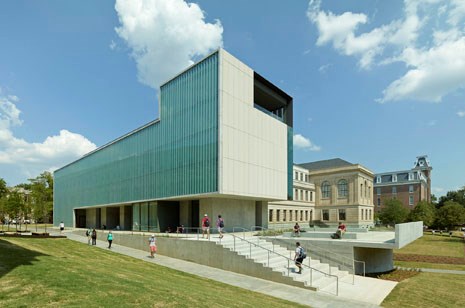 The renovated Vol Walker Hall with its new addition, the Steven L. Anderson Design Center, was named a finalist in the 2014 World Architecture Festival Awards. (Photo by Timothy Hursley)

FAYETTEVILLE, Ark. – The home of the Fay Jones School of Architecture – the renovated Vol Walker Hall with its new addition, the Steven L. Anderson Design Center – has been chosen as a finalist in the 2014 World Architecture Festival Awards, the world’s largest architecture design awards program serving the global community.

More than 400 projects from more than 40 countries were short-listed across 31 individual award categories for the festival, to be held this week in Singapore. The Vol Walker Hall project is one of 16 short-listed projects in the Higher Education and Research category. This project is the only one in its category to represent the United States.

The 34,320-square-foot design center addition is made from limestone panels, steel, architectural concrete, Arkansas white oak and glass. Added to the 56,635 square feet previously in Vol Walker Hall, the total space in the building is now 90,955 square feet.

This state-of-the-art facility – which includes several design studios, a computer lab, a design shop, a 200-seat lecture hall, a securable exhibition gallery, student and faculty lounge areas and a green roof – is helping to enhance and expand the top-tier design education provided by the school’s faculty and administration.

“This international recognition of Vol Walker Hall and the Steven L. Anderson Design Center is both deserved and timely,” said Peter MacKeith, dean of the Fay Jones School. “As the university continues its ascent into the top 50 U.S. public universities, its ambition and its confidence are represented most tangibly on campus and to the world by the strength of the Vol Walker Hall design. As the Fay Jones School continues its ascent into the top ranks of architecture and design programs, Vol Walker Hall literally embodies its ambitions and its qualities.”

The building project already has garnered many accolades, including a Gulf States Region AIA Honor Award, AZ Award for Best Commercial/Institutional Architecture, Architect’s Newspaper Building of the Year, Lumen Award for Excellence and LEED Gold certification – all in 2014. In 2012, it received a Building Information Modeling Award from the American Institute of Architects for Exemplary Use of BIM in a Small Firm.

In 2010, the Donald W. Reynolds Foundation donated $10 million to name the addition to Vol Walker Hall the Steven L. Anderson Design Center, honoring Anderson, foundation president and a 1976 graduate of the Fay Jones School’s architecture program. The university also contributed $19.8 million toward the estimated $36.6 million project – an example of how the campus facilities fee is being used to help pay for deferred maintenance and renovation for specific capital improvements.