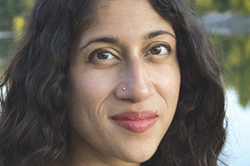 The Scotiabank Giller Prize, one of Canada's most prestigious literary awards, has recognized assistant professor of fiction Padma Viswanathan for her latest novel, The Ever After of Ashwin Rao. Padma joins a longlist of twelve Canadian authors in the running for the $100,000 prize.

Said the prize jury: “We’re celebrating writers brave enough to change public discourse, generous with their empathy, offering deeply immersive experiences. Some delve into the sack of memory and retrieve the wisdom we need for our times, others turn the unfamiliar beloved. All are literary achievements we feel will touch and even transform you.”

Padma joined the U of A Program in Creative Writing and Translation as a tenure-track faculty member this fall. The Ever After of Ashwin Rao, her second novel, follows an Indian psychologist as he investigates the fatal bombing of an Air India plane from Vancouver, twenty years after its fateful flight. His intent is to create a "study of comparative grief," but his interest is more emotionally complex than he would lead his subjects to believe. The novel has been garnering praise since its release earlier this year. Padma's first novel, The Toss of a Lemon, was published in 2008 to critical acclaim.

Founded in 1994, the Scotiabank Giller Prize aims to recognize excellence in Canadian fiction. This year, it will award $100,000 to a winner and $10,000 each to four finalists.