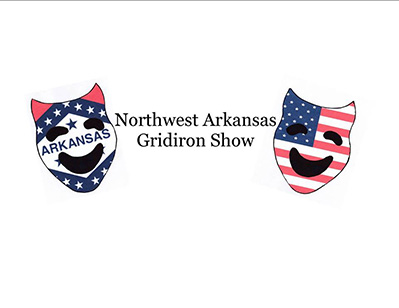 FAYETTEVILLE, Ark. – Despite a year of international turmoil and statewide upheaval, the writers for the Northwest Arkansas Gridiron Show promise an evening of fun Oct. 3 and 4. In fact, turmoil and upheaval are what it’s all about.

The Gridiron Show is the annual spoof of local, state and national news events, written and performed by local journalists, performed as a fundraiser for university scholarships.

Tickets may be purchased with a credit card from the Rogers Little Theater website, or by calling the box office at 479-631-8988. Tickets will also be available at the door while seats last.

The Gridiron is the primary fundraising event for the Society of Professional Journalists and the American Association of University Women. The Society of Professional Journalists will fund scholarships in the Walter J. Lemke Department of Journalism with its profits, and the AAUW will contribute its share to the Single Parent Scholarship Fund, the AAUW scholarship at the University of Arkansas, and the AAUW Educational Foundation and Legal Advocacy Fund. The show will also benefit the Rogers Little Theater building fund. A portion of the ticket price is tax deductible.

The show is co-produced by the Northwest Arkansas Society of Professional Journalists and the Fayetteville Branch of the American Association of University Women. AAUW members design and paint sets, produce the playbook and provide refreshments during the show.

John Threet, Washington County prosecutor, will emcee the show this year. The Gridiron writers offered Threet one last chance to shed all semblance of dignity before he dons the robe of circuit judge in January. He ran unopposed for the seat.

As usual, the musical director is Emily Kaitz, a local singer/songwriter.

The writers found lots of local news to spoof on stage this year. The show brings in the Ducks Dynasty crew to get the show started with an unusual duck call. And there’s more television spoof when Mike Huckabee unveils his version of “The Cosmos.”

On the local level, the show offers help to those confused by the new traffic circles in the region, looks at how the new development on the west side of Springdale is going, and examines the problems with the lack of ambulance service in rural Benton County.

The show also takes on the coming competition between natural food stores, as well as the prediction of a tsunami hitting Springdale.

Up on the hill, the University of Arkansas hears from a former childhood star who comments musically on the “Flagship U of A.” Coach Broyles retires – again. And what was that green glow near the stadium last winter? Gridiron has the answer.

On the state level, Mark Darr loses his seat as lieutenant governor, not to mention the perks that went with it. And the cast revisits the Eureka Springs courthouse where so many same-sex couples sought marriage licenses late last spring.

The historic takeover of the Arkansas legislature by Republicans is examined in a takeoff of “Jersey Boys,” which the writers are calling “Noisy Boys.” The musical spoof ends the first act.

National politics is heating up again as the midterm elections take shape and White House wannabes are deciding whether to run. President Obama tries to deal with the Republicans who are threatening to sue him, while Hillary Clinton tries to decide whether to run for president and Chris Christie wonders if he still can.

The U.S. Supreme Court was in the news more than usual last year and the Gridiron treats most of their actions with humor. Some Hobby Lobby employees wonder aloud how they will cope without their insurer’s contraceptive coverage and the Koch Brothers and their billionaire friends celebrate the decision about campaign financing.

The Supreme Court’s decisions make up the finale of the show, with “The Fabulous Motown Revue Presents the Supremes.”

The cast features 33 local journalists and journalism students who play more than 100 roles in the show. The program is presented in two 45-minute acts with a 20-minute intermission.

Tickets are $25 each and include the show and a reception at intermission when AAUW members will serve refreshments and the cast will mingle with the audience members. There will also be a cash bar.

For more information about the Gridiron, go online to nwagridiron.com.

Rogers Little Theater (Victory Theater) is located at 116 S. Second St. in downtown Rogers.  From Interstate 49, take the Walnut Street exit (Highway 71B), exit 85. Go east about 2.6 miles to North Second Street. Turn right on North Second (south). The theater is half a block down on the right (west).

Patrons are invited to park diagonally along the streets adjacent to the building. Nearby public lots are located at Second and Elm streets (a half block from the theater), around the corner mid-block on Walnut between Second and Third streets; and in Frisco Park.

Special seating for patrons in wheelchairs is available. Please inform box office personnel before you come about any needs.