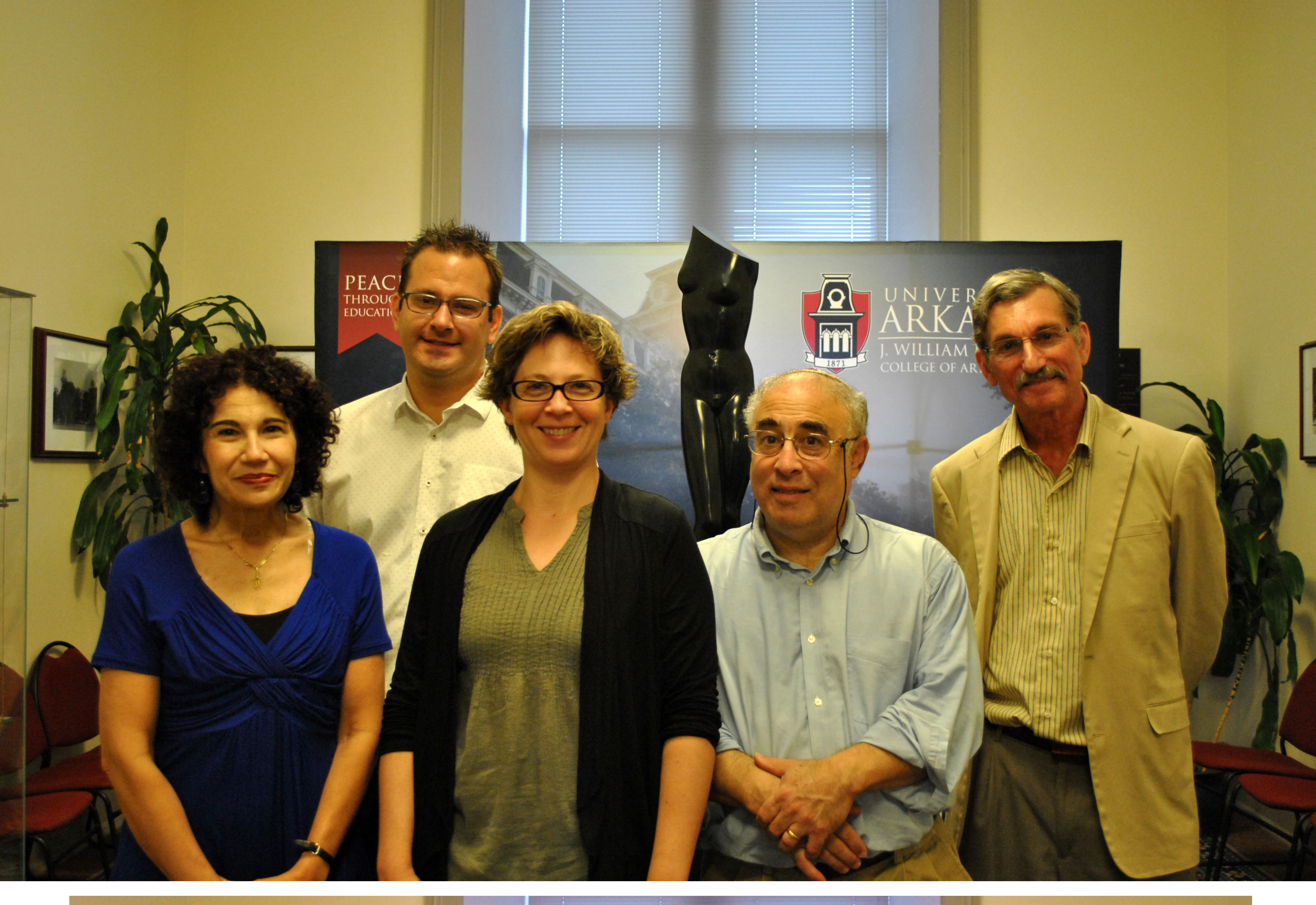 Faculty of the Jewish Studies Program

The Fulbright College of Arts and Sciences is pleased to announce the formation of a new program in Jewish studies. Launched by an ambitious interdisciplinary group of scholars, the Jewish Studies Program has already received external funding from the Jewish Federation of Arkansas and has sponsored an exciting repertoire of lectures and programs for the university and wider community ranging from Yiddish cinema, biblical women, and biblical archaeology, to the history of Jews in Arkansas.

The Jewish Federation of Arkansas awarded the 2014 Tikkun Olam prize to Jennifer Hoyer, a faculty member of the Jewish Studies Program, in recognition of her pioneering work in Jewish studies. When contacted for this story, the director of the Jewish Federation of Arkansas, Marianne Tettlebaum, reported that "a Jewish Studies Program will enrich not only the intellectual and cultural life of the university, but also Jewish life in Arkansas, by raising awareness of Judaism and Jewish life here and thereby helping to attract those interested in Judaism and Jewish culture to Arkansas."

The seeds for Jewish Studies have long been present at the University of Arkansas. Several years ago, Jacob Adler (philosophy) and Jennifer Hoyer (world languages, literatures and cultures) began exploring the potential for consolidating Jewish studies interests across campus and creating an articulated, degree-granting program that would allow U of A students access to Judaism and Jewish cultures, histories, and lifeways as an academic discipline. In an effort to raise awareness of the relevance for Jewish studies as an area studies program at the University of Arkansas as well as the long-standing presence of Jewish life in Arkansas, Adler and Hoyer began exploring potential grants that would support opportunities to offer courses and create public outreach events.

Professor Adler has offered over the years courses in Aramaic and Hebrew, the land of Israel, and topics in Jewish thought and history; professor Hoyer has offered courses in Holocaust writing and German Jewish culture and history; Gwynne Gertz (English) began teaching courses in American Jewish writing several years ago. Other faculty have included aspects of Jewish studies in their research, for example Richard Sonn (history) who has done work on European intellectual history, specializing in Jewish contributions, and Jewish émigré artists in France; Nancy Arenberg (world languages, literatures and cultures) has written about Northern African and Middle Eastern writers as well as French-Canadian migrant Jewish authors; Daniel Levine (classical studies) has researched both Jews in classical and antiquity and the resonance of classical antiquity in current Jewish American literature; and Lynda Coon (history) specializes in European medieval religious culture, including conceptions of the Torah in the medieval West.

For students, staff, faculty, and members of the community at-large, the Jewish Studies Programm will be hosting a series of public programs during the fall 2014 semester:

Here you can access archived video or transcription of past events, and keep up-to-date with coming events and course offerings.

The faculty of the Jewish Studies Program in Fulbright College would like to take this opportunity to thank the leadership of the Jewish Federation of Arkansas for their continued support.