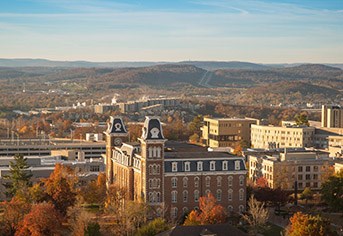 The University of Arkansas.

FAYETTEVILLE, Ark. – For the fourth year in a row, the University of Arkansas completed its fiscal year by raising over $100 million in private gift support.

“This was a remarkable year for us,” said Chris Wyrick, vice chancellor for university advancement. “Our donors stepped forward and made significant investments in the University of Arkansas because they believe in our overall vision and our desire to make a positive impact on the state.

“Our faculty and staff deserve recognition for their hard work as well. Our advancement team has bonded significantly over the last year, and the entire division is producing excellent results. I am very proud to work with these individuals and look forward to seeing what else we can accomplish together.”

Students and programs were supported with 48 percent of the money raised, while nearly 31 percent supported capital improvements, 16 percent supported faculty and staff and 5 percent supported other initiatives. The campus brought in a record-setting 90,543 outright gifts and new pledges from 48,383 benefactors during the fiscal year. There were also 11,476 new donors to the university.

Approximately $28.7 million of the total amount raised, or a little more than 25 percent, was allocated for endowed funds and will add to the university’s overall endowment total. The university saw a 36-percent increase in endowed funding over the previous year.

Doug and Shelley McMillon, whose $1 million gift to the university was announced earlier this year were happy to contribute to the university’s fundraising success. Doug McMillon, an alumnus of the University of Arkansas, is the president and chief executive officer of Walmart Stores Inc.

“This is an exciting time for the University of Arkansas, and we are proud to be a part of it,” said the couple. “There is strong alumni support for the university because we know how much it has meant in our own lives, and we’re committed to strengthening this world class institution for generations to come. We’re grateful for the chance to give back.”

“Thanks to our benefactors, faculty and staff, students and stakeholders, the University of Arkansas is stronger than ever,” said Chancellor G. David Gearhart. “Our enrollment continues to climb, and the academic strength of our students has increased with our growth. We’re engaged in outreach throughout the state and are focusing on increasing the number of Arkansans with college degrees.

“We’re concentrating on our graduation rates and amplifying our retention efforts,” he said. “And we’re earning a reputation for being an innovative, top tier research university. We are deeply grateful to our generous benefactors who help make all this possible. It’s encouraging to see them stand behind our vision and our goal of becoming a top 50 public research university, which will ultimately benefit the state as a whole.”

Private gift support continues to be a critical component to the university’s success, as it adds to the academic opportunities available to faculty, staff and students on campus. These contributions enhance all aspects of the student experience, including academic and need-based scholarships, technology enhancements, new and renovated facilities, undergraduate, graduate and faculty research, study abroad opportunities and innovative programs.The university makes every effort to align donors’ giving interests with campus priorities.

The University of Arkansas provides an internationally competitive education for undergraduate and graduate students in a wide spectrum of disciplines; contributes new knowledge, economic development, basic and applied research and creative activity; and provides service to academic and professional disciplines and to society in general, all aimed at fulfilling its public land-grant mission to serve Arkansas and beyond as a partner, resource and catalyst. The Carnegie Foundation classifies the University of Arkansas among only 2 percent of universities in America that have the highest level of research.