Chemistry Professor One of World's Most Highly Cited Researchers in 2014 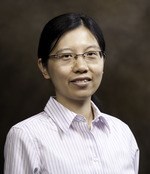 Jingyi Chen, assistant professor of physical chemistry in the department of chemistry and biochemistry, is included in the list of the world’s most highly cited researchers in 2014.

The list Highly Cited Researchers is compiled annually by Thompson-Reuters, publishers of the Citation Index and Web of Science. It has only 198 entries in chemistry, in addition to 195 entries in biochemistry. To make the list, scientists must rank among the top 1 percent most cited for their subject field and year of publication, earning them the mark of exceptional impact.

According to the publisher, “Highly Cited Researchers 2014 represents some of world’s leading scientific minds.” Adjunct professor Xiaogang Peng, a highly acknowledged scientist who is now at Zhejiang University in Hangzhou, China, is also on the list. Both he and Chen work in the field of nanomaterials.

The complete list and detailed methodology can be found at highlycited.com.