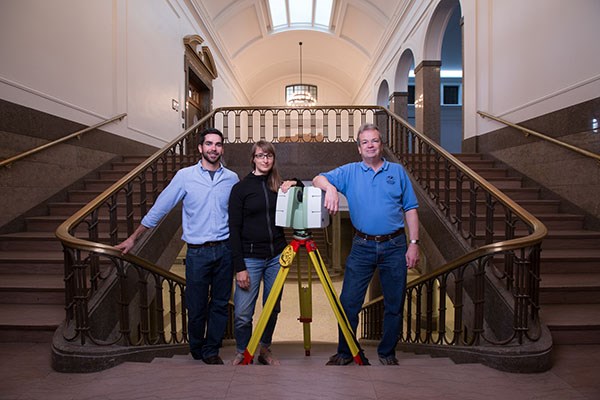 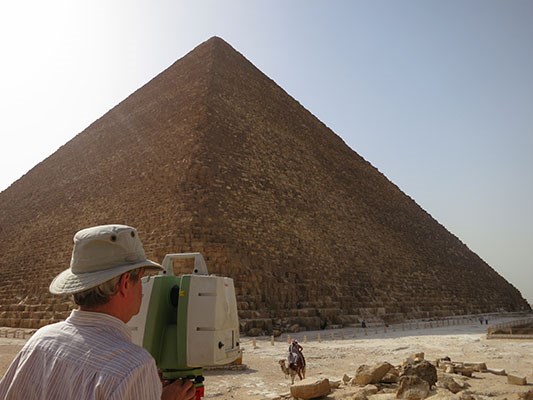 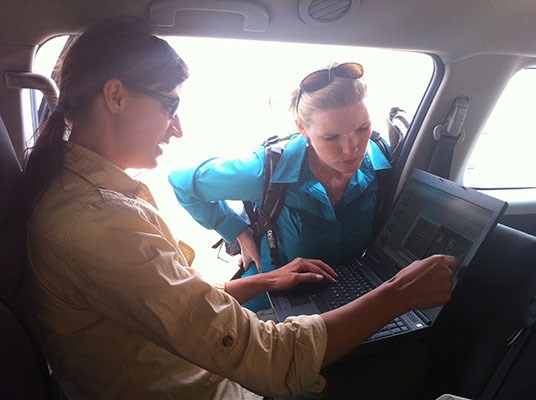 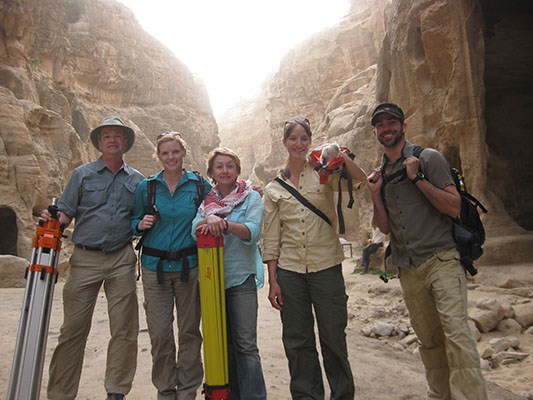 CAST researchers paused to take a group photo on location in Petra. 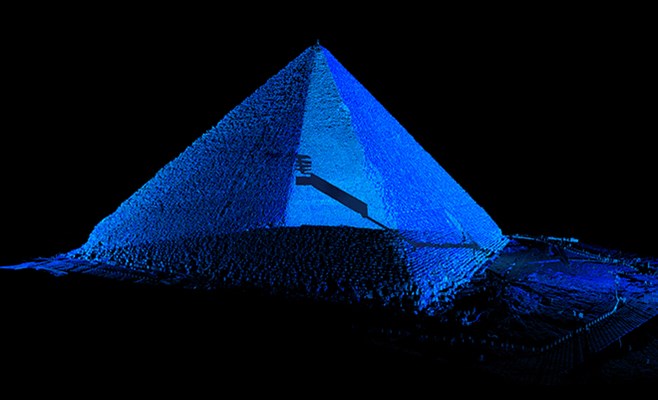 A 3-D "point cloud" of the Great Pyramid of Giza. Courtesy Atlantic Productions 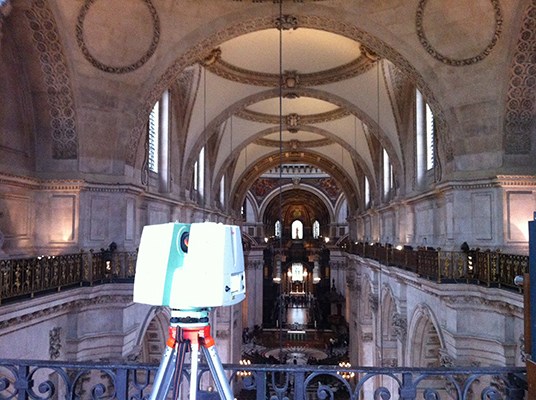 Scanning the west end of the interior of St. Paul's Cathedral from the triforium level. 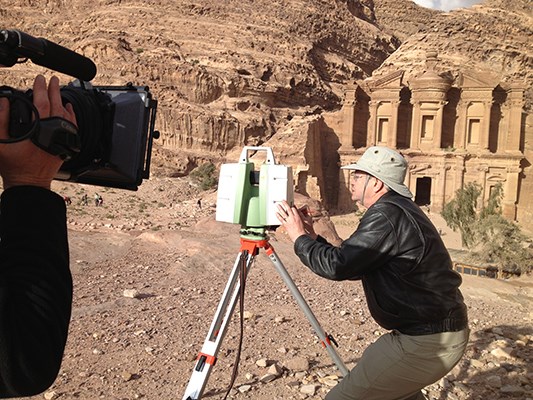 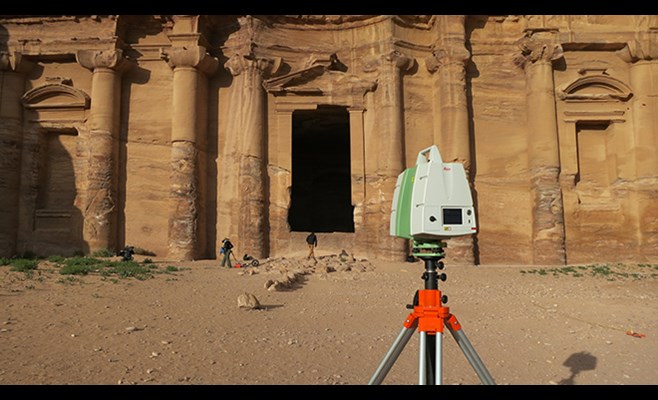 A CAST laser location at the Monastery at Petra. Courtesy Atlantic Productions 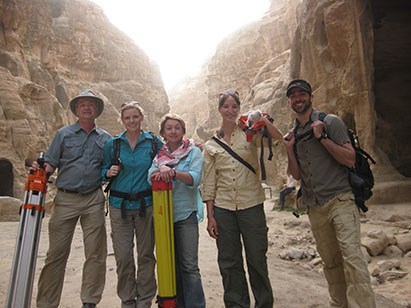 FAYETTEVILLE, Ark. – The Center for Advanced Spatial Technologies at the University of Arkansas, one of the world’s preeminent research centers in the field of geospatial analysis, is featured in a three-part television series that will air nationally in July on PBS.

Time Scanners is scheduled for broadcast on the Arkansas Educational Television Network at 7 p.m. on Tuesday, July 1; Tuesday, July 8; and Tuesday, July 15. The public is invited to watch the premiere episode on the University of Arkansas campus in Ken and Linda Sue Shollmier Hall, Room 250 of Vol Walker Hall. The event kicks off at 6:30 p.m.

Time Scanners took the CAST researchers to historic locations around the world, including the pyramids in Egypt, St. Paul’s Cathedral in London and the ancient desert city of Petra. CAST researchers used their advanced remote sensing technology to collect and analyze billions of measurements to form what is known as a point cloud, which not only provided a 3-D perspective of these structures but also solved some of the enduring engineering mysteries surrounding them.

According to PBS, the series “reveals physical and forensic history, allowing viewers to reach out and touch the past.”

“This was a once-in-a-lifetime experience for our researchers to create point clouds for some of the world’s most famous feats of architecture and engineering,” said Jackson Cothren, director of CAST. “We were recognized as one of the preeminent organizations that could do this. Being part of this series capped a decade-long growth period for CAST.”

Steve Burrows, executive vice president of WSP, a global engineering and design consulting firm, is the featured expert in Time Scanners. He said, “The laser scanning technology meant that we could analyze the ancient structures in a way that no one ever has before, and some of the things we found were incredible.”

CAST, established in the J. William Fulbright College of Arts and Sciences in 1991, is dedicated to research and applications in geospatial analysis and modeling, remote sensing and digital photogrammetry. Remote sensing is the measurement or acquisition of information about an object without direct contact, such as by satellite imaging, radar or aerial photography. Photogrammetry is the science of recording, measuring and interpreting photographic images or other two-dimensional, remotely sensed data.

“Our role in the series is portrayed strongly as the technologists, experts and analysts in gathering and interpreting the data,” said Malcolm Williamson, a research associate at CAST who collected and analyzed data in Egypt and Jordan.

The production schedule for the series was tight, so the CAST researchers had to collect and analyze data in a couple of days. The process typically takes at least two weeks, said Simon, a research assistant at CAST who holds a master’s degree in remote sensing applications in archaeology from the University of Arkansas.

“These were some pretty unique circumstances, so we were always thinking about making things work properly because we weren’t going to get a second chance,” she said.

Time Scanners premieres July 1 with “Egyptian Pyramids.” For the episode, Stevens and Williamson traveled to Egypt to scan the pyramids — the tombs of the mighty pharaohs — to find out how they evolved from simple mud-brick structures to the most impressive buildings in the ancient world.

“One of my high points on the show was scanning the Great Pyramid of Giza,” Williamson said. “I thought that was really cool. How many people in the world get to do that?”

On July 8, the series shifts to St. Paul’s Cathedral in London, designed in the late 1600s by Sir Christopher Wren and famed in recent years as the location of the marriage of Prince Charles and Lady Diana Spencer. The researchers were tasked with finding out how Wren overcame unstable foundations and immense structural forces to support his dome, and also to investigate how the cathedral was able to survive a direct hit by a German bomb during the blitz of London in World War II.

“St. Paul’s was fun because it had a lot of inside spaces that not a lot of people have seen for a long time, and we got to access and scan them,” Barnes said. “We got to see graffiti on the walls from the 1700s. The data we collected and analyzed was just beautiful.”

The final installment, “Petra,” airs on July 15 with CAST researchers venturing to Jordan to scan the ancient desert city of Petra. They used their scanning techniques to explore how Nabatean stonemasons carved Petra’s largest building – the Monastery – out of a mountainside more than 2,000 years ago. The researchers discovered what lies underneath the city.

Time Scanners was produced by Atlantic Productions, with Lara Acastar as the series producer and Anthony Geffen as executive producer.

Atlantic Productions is part of a group of companies that covers television, theatrical and IMAX films, apps and computer graphics. Their films have won some of the most coveted awards and been seen in over 100 countries worldwide. Extensive television work include the award-winning Flying Monsters 3D, Jerusalem: City of Heaven and the First Life series, Kingdom of Plants series and Rise of Animals series.

PBS, with its over 350 member stations, offers all Americans the opportunity to explore new ideas and new worlds through television and online content. Each month, PBS reaches nearly 109 million people through television and over 28 million people online, inviting them to experience the worlds of science, history, nature and public affairs; to hear diverse viewpoints; and to take front row seats to world-class drama and performances. PBS’ broad array of programs has been consistently honored by the industry’s most coveted award competitions. Teachers of children from pre-K through 12th grade turn to PBS for digital content and services that help bring classroom lessons to life. PBS’ premier children’s TV programming and its website, pbskids.org, are parents’ and teachers’ most trusted partners in inspiring and nurturing curiosity and love of learning in children. More information about PBS is available at www.pbs.org, one of the leading dot-org websites on the Internet, or by following PBS on Twitter, Facebook or through our apps for mobile devices. Specific program information and updates for press are available at pbs.org/pressroom or by following PBS PressRoom on Twitter.

The University of Arkansas provides an internationally competitive education for undergraduate and graduate students in a wide spectrum of disciplines; contributes new knowledge, economic development, basic and applied research and creative activity; and provides service to academic and professional disciplines and to society in general, all aimed at fulfilling its public land-grant mission to serve Arkansas and beyond as a partner, resource and catalyst. The Carnegie Foundation classifies the University of Arkansas among only 2 percent of universities in America that have the highest level of research.

Fulbright College is the largest and most diverse academic unit on campus with 19 departments and more than 30 academic programs and research centers. The college provides the core curriculum for all University of Arkansas students and is named for J. William Fulbright, former university president and longtime U.S. senator.