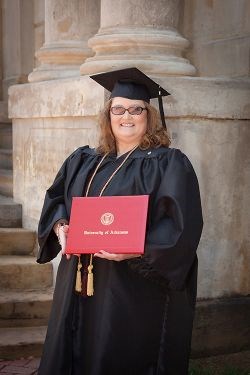 FAYETTEVILLE, Ark. – Melinda Leigh McDaniel wanted to earn her bachelor’s degree, but she did not want to give up her full-time job or miss her grandchildren’s Little League games. A few years ago, she discovered an online program that let her do it all.

McDaniel, 57, from West Memphis, is now a 2014 graduate of the University of Arkansas. This May, she earned a Bachelor of Science in Education in human resource and workforce development by taking online courses.

“I guess I am old school, I thought I had go to a class [on a campus],” McDaniel said. “And then this whole new world opened up for me with computers. I didn’t know there were degrees online. It was the perfect fit at the perfect time for me.”

She is the last person in her immediate family to earn a bachelor’s degree, and she did it 40 years after she graduated from Bishop Byrne High School in Memphis, Tennessee.

West Memphis is a 30- or 45-minute drive from the nearest four-year institution, a distance barrier that she said she could not surpass. She had no time to make the drive because she was working full time in the finance office at Mid-South Community College, where she earned her associate’s degree in 2012.

Then she learned that the University of Arkansas offered degree programs that are completely or primarily online.

McDaniel enrolled and spent two to three hours on her computer every night studying online, after cooking dinner. Her academic determination was reflected in her grades. In April she was inducted into Alpha Sigma Lambda Honor Society, which requires a GPA of 3.6 or higher.

“Self-discipline is the No. 1 criteria to success,” she said. “If I know I have an assignment due next Friday, I start on it this Saturday, in case something comes up. You have to work ahead so that you do not fall behind.”

She said she felt like she was part of the university community, even though she lives five hours away. She counted on help from Phil Gerke, adviser to undergraduates in the program, and other online students.

“Phil Gerke has been marvelous, a godsend,” McDaniel said. “He would answer any questions I had, and he always kept me up to date on my status.”

Gerke sent an advisement worksheet at the end of each semester, listing the courses McDaniel had taken and which she needed for graduation.

“I could make good, wise decisions about which classes to take,” McDaniel said. “It made me feel a part of the university. It made me feel that he cared about me.”

Gerke understands the needs and fears of non-traditional students because he took that path too, he said. An academic adviser in 1996 did for him what he does for his advisees.

“Lack of knowledge is a huge barrier,” Gerke said. “By simply laying out a clear path for someone to follow and reducing the fear of the unknown, that turns all the lights green for adult learners. Leigh McDaniel is a great example of that.”

McDaniel also became close to the students in her cohort group who went through the program at the same time, she said. They worked together on group projects, and they discussed classes through emails and phone calls. Many times the academic discussions would turn into personal conversations.

“I feel like we’re family because we’ve been on this roller coaster together,” she said. “The majority of us are over 30 and have kids and a life outside the university.”

McDaniel met her classmates face to face for the first time at the College of Education and Health Professions commencement ceremony May 10.

“I wanted to hug their necks and thank them for helping me through this,” McDaniel said. “We’ve never met in person, but we can count on each other. We were all working toward the same goal.”

One of the faculty members who stood out to her was Mandel G. Samuels, who encouraged her, she said.

“He gave you tips so that the next time you wrote a paper you could use the feedback and do better,” she said. “He made you want to do better, and he still encourages students after you leave his class.”

“It is very rewarding to work with students such as Melinda and see them grow in their knowledge, skills and capabilities,” Samuels said.

McDaniel celebrated her achievement by attending commencement and touring Senior Walk with her husband, Robert McDaniel; mother, Joyce McCuiston; stepfather, Lloyd C. McCuiston, Jr. (a 1941 U of A graduate) and sister, Nancy Daniel (a 1968 U of A graduate). Senior Walk is a series of sidewalks on the Fayetteville campus that hold the names of more than 150,000 graduates, listed by year of graduation.

McDaniel’s name will be listed with the class of 2014.