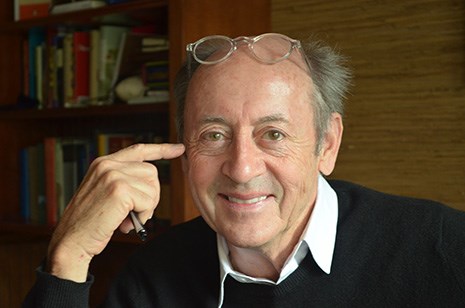 FAYETTEVILLE, Ark. – Acclaimed American poet Billy Collins has been named the editor of the Miller Williams Poetry Series, published by the University of Arkansas Press.

As editor, Collins will be ultimately responsible for the books published through the series and for choosing the winner of the annual $5,000 Miller Williams Poetry Prize.

“The driving values of the series and the prize will be consonant with Williams’s sense of what constitutes good poetry,” said Collins. “In his practice as a poet and his work as an editor, Williams favored poetry that showed an awareness of its reader, poetry that was plain spoken but also dealt with the most essential experiences of being human. He also preferred poems that were interested in making the reader feel something rather than poems that were just expressing the plight of the poet. And a bit of humor never hurt, especially if it issued forth from a sensibility that couldn’t help viewing the world from an ironic angle.”

Collins’ relationship with the University of Arkansas Press began in 1988, when his first book of poetry, The Apple That Astonished Paris, was published by the press under the directorship of Miller Williams. Collins went on to have a successful writing and teaching career that included serving as U.S. Poet Laureate from 2001 to 2003. Apple remains one of the press’s best-selling books. In the preface to the second edition, Collins credits Williams with being the first person to endorse him and calls Williams his “first editorial father.”

Williams said of the new appointment, “I think this is a marvelous decision to make, and it would have pleased me greatly to have had that opportunity when I was director of the press.”

“The fact that the press helped launch Billy Collins’ career is a source of pride for us all here at the press,” said press director Mike Bieker. “We are thrilled to have him as series editor. This change is exciting because it harkens back to our roots while at the same time taking us into the future.”

The Miller Williams Poetry Series has its roots in the Arkansas Poetry Prize, first awarded in 1990. In 2002 poet Enid Shomer became the editor, and in 2009 the press began to offer a $5,000 prize — one of the largest of its kind in the country. A concert by Lucinda Williams, the Grammy-award-winning daughter of Miller Williams, established funding for the prize. Under Shomer’s leadership, the poetry series published almost 50 books and garnered several awards, including the Kate Tufts Discovery Award, the Paterson Poetry Prize, the Brockman-Campbell Book Award, and the Library of Virginia Poetry Award.

The University of Arkansas Press accepts submissions of manuscripts for the prize year round. As many as four of those manuscripts (the winner and up to three finalists) are selected for publication. The winner receives $5,000 in cash in addition to publication.

Miller Williams, over the course of a teaching and publishing career that lasted four decades, published over a dozen of his own books of poetry and literary theory. In 1997 he read his poem “Of History and Hope” at Bill Clinton’s second inauguration. Today he is professor emeritus at the University of Arkansas in Fayetteville, where he lives with his wife, Jordan.