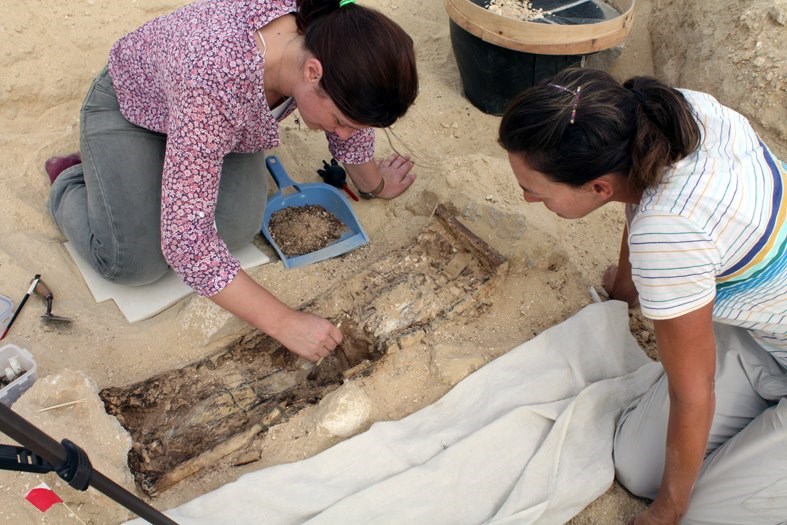 Excavation of a child grave at Amarna Cemetary

The King Fahd Center for Middle East Studies is pleased to welcome Anna Stevens of the department of ancient Egypt and Sudan at the British Museum, who will be in residence at the University of Arkansas from April 14 through April 18. Stevens is affiliated with two important sites in the Nile Valley.  She is assistant director for the Amarna Project in Upper Egypt, where she works in tandem with U of A archaeologist Jerome Rose, and is site supervisor and project curator for the Amara West Project in Northern Sudan. Her primary research interests are the reconstruction of urban life and religion in ancient Egypt, primarily through material remains.

The ancient Egyptian city of Tell el-Amarna (or simply Amarna) was the short-lived capital built by the ‘heretic’ Pharaoh Akhenaten and abandoned shortly after his death (c. 1332 BCE). It was here that he pursued his vision of a society dedicated to the cult of one god, the power of the sun (the Aten). Amarna remains the largest readily accessible living-site from ancient Egypt. It is thus simultaneously the key to a chapter in the history of religious experience and to a fuller understanding of what it was like to be an ancient Egyptian. There is no other site like it.

Amara West is an ancient town in northern Sudan, the administrative capital of Upper Nubia, known as Kush, occupied by pharaonic Egypt between 1500 and 1070 BC. Each year a team of specialists excavates at the town, revealing ancient buildings and recovering objects.

Stevens received her doctoral degree in Egyptian archaeology from Monash University in Melbourne, Australia. She is currently the Amara West Project Curator for the Department of Ancient Egypt and Sudan of the British Museum, and also serves as the Assistant Director of the Amarna Project, which works with the Egyptian government and the Supreme Council of Antiquities to explore and preserve the ancient city of Amarna, promote study and recording of the history, archaeology and traditional life and crafts of the surrounding region, and to increase public knowledge, at all levels, of the city of Amarna and of the surrounding region. Stevens has participated in excavations throughout Egypt and the Sudan, and has received numerous grants towards the Amarna South Tombs Cemetery and Stone Village Projects. She is the author of Private Religion at Amarna: The Material Experience (2006), The Amarna Stone Village Survey (2012), and co-editor of Busy Lives at Amarna (2010).

Stevens will present a lecture titled ‘Akhenaton's People: Excavation of the Amarna Cemetery (Ancient Egypt)’ on Thursday, April 17th at 4:00 PM in Giffels Auditorium (Old Main 201) with a discussion to follow. This event is free and open to the public.

Additionally, Stevens and Rose, U of A professor of anthropology, will take part in a forum titled ‘Archaeology and the Egyptian Revolution – Politics of Antiquity’ at 2 p.m. April 18 in Science and Engineering (SCEN) 408. This event is also free and open to the public.

These events are sponsored by the King Fahd Center for Middle East Studies, an academic and research unit in the J. William Fulbright College of Arts and Sciences at the University of Arkansas. An interdisciplinary and interdepartmental area studies center that offers diverse cultural, intellectual, and educational opportunities for the University of Arkansas community, it promotes research and teaching in interdisciplinary Middle East studies. The center offers an undergraduate major in Middle East Studies and supports graduate studies in related departments through the Middle East Studies Program, as well as summer language study and research assistantships for graduate students and teaching and research by visiting scholars from affiliated universities and programs. More information about the King Fahd Center can be found at http://mest.uark.edu.  For ongoing news, follow the center on Facebook and Twitter.