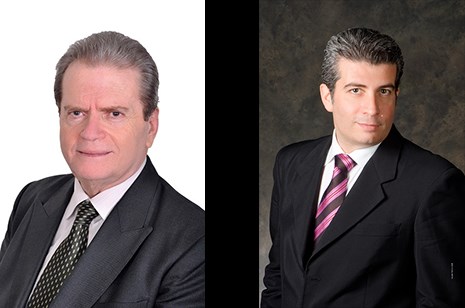 FAYETTEVILLE, Ark. – The King Fahd Center at the University of Arkansas will present “Zajal Live: A Poetic Duel in Lebanese Arabic”, a special performance by two of Lebanon’s masters of the art of oral poetry – zajal – Antoine Saadeh and Bassam Harb. The event will take place at 6 p.m. Saturday, April 5 in the Reynolds Center. The performance is free and open to the public.

Zajal is a traditional form of oral poetry declaimed in colloquial Arabic dialects. It is semi-improvised and semi-sung and is most often performed in the format of a lively duel between as many as 8 poets, who divide into competing jawqas or teams. Duelists engage in verbal play upon a common theme, dividing by teams into two sides of an issue. Their word play consists of original rhyme schemes, punning, satire and colorful insults. Zajal poets are complemented by riddadi, musical accompanists who repeat key verses or refrains, often to encourage the poets and heighten the spirit of competition.

Prior to the event, professor Adnan Haydar will explain the ‘rules of engagement’ and during a short intermission he will summarize the opening half of the duel.

The zajal poetic tradition is most popular in the North African and Levantine regions of the Middle East, especially in Lebanon and Palestine where professional zajal practitioners can attain high levels of recognition and popularity. The first recorded Lebanese zajal poem dates back to the year 1289, though the tradition is thought to have its roots in ancient Pre-Islamic Arabic literature, and has grown into an integral part of Lebanese folk culture. Major developments in the tradition took place in the Lebanese mountains, where zajal filled an important entertainment vacuum in villages. Modern zajal duels are well-organized public events comparable to poetry slams, but attracting hundreds in festival settings that compete with musical concerts.

As a prelude to the performance, Middle East Studies instructor Paula Haydar will offer an introductory brown-bag session on the history and tradition of zajal poetry. This session is also free and open to the public, and will be held at 1:30 p.m. Friday, April 4 in room 408 of the Science and Engineering building.

Antoine Saadeh is one of the leading zajal poets of his generation and one of the most famous senior duelists in Lebanon. He was born in 1948 in Deir Dourit, a village in the Shouf Mountains of southern Lebanon. He participated in numerous verbal duels prior to founding Al-Masrah, his own jawqa (team) in 1973. In recognition of his unique poetic and improvisatory talents, he earned many honors from various literary circles and organizations. In 1993 he published a volume of poetry, The Pecks of a Bird.

Bassam Harb, the son of poet Edward Harb, is a star of the new generation of poets keeping the zajal tradition alive. He began writing poetry at the age of twelve and has been a regular participant in zajal duels since 1992 along with Antoine Saadeh and other greats. He has been a member of the Governing Board of Lebanese Zajal Poets since 2008, and has performed in Australia, France and throughout the Middle East.