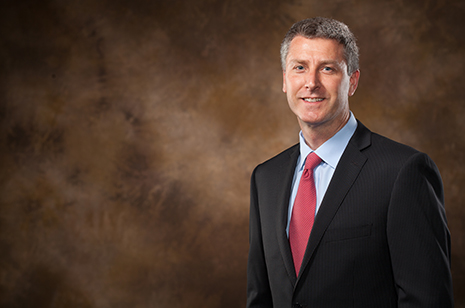 FAYETTEVILLE, Ark. – Physicists have found that platinum nanoparticles limit their size and organize into specific patterns when bonded to freestanding graphene.

While displaying this behavior, the bonded platinum nanoparticles maintain an effective surface area functioning as a catalyst for chemical reactions, a discovery that could lower the production costs of platinum-catalyzed fuel cells.

An international team of scientists, led by a research group at the University of Arkansas, published its findings on Feb. 5 in the journal ACS Nano, in a paper titled, “Self-Organized Platinum Nanoparticles on Freestanding Graphene.”

The study was led by Peng Xu, a research associate in the department of physics in the J. William Fulbright College of Arts and Sciences at the University of Arkansas.

Platinum-catalyzed fuel cells are used to power buildings as replacements for the internal combustion engines in vehicles.

“Because platinum is a rare metal, a lot of the expense that goes into manufacturing hybrid vehicles is coming from the platinum needed to catalyze fuel cells,” said Paul Thibado, a professor of physics at the University of Arkansas.

“Platinum, when placed on solid surfaces, diffuses to form random particles that grow uncontrollably, and that limits their reactivity,” he said. “On the other hand, freestanding graphene has a very flexible surface, and we found that, due to local strain effects, there is an 80 percent reduction in the amount of platinum needed to maintain effective catalysis.”

The research also shows, for the first time, that a functionally superior, single-crystal platinum nanoparticle emerges from its application to graphene.

“What we found was pretty exciting,” Thibado said. “It’s really quite special.”

Graphene — one of the strongest, lightest and most conductive materials known — is a one-atom-thick sheet of carbon atoms. Electrons moving through graphite have mass and encounter resistance, but electrons moving through graphene are massless and therefore encounter much less resistance. This makes graphene an excellent candidate material for future energy needs, as well as in quantum computing for enormous calculations with little energy use.

Graphene was discovered in 2004, and much remains unknown about its properties. Thibado’s group uses atomic-scale imaging and manipulation to advance the applications of both pristine and chemically functionalized graphene, through the development of a detailed understanding of its fundamental electronic and mechanical properties.

The recent study, which was produced primarily through a research partnership between the University of Arkansas, Missouri State University and the University of Antwerp in Belgium, consisted of high-resolution transmission electron microscopy combined with scanning tunneling microscopy and state-of-the-art computational molecular dynamics. That is a combination rarely seen in physics, said Thibado, an expert in experimental condensed matter physics.

Scanning tunneling microscopy, which produces images of individual atoms on a surface, was used to view the behavior of the platinum nanoparticles on the graphene. Researchers in Missouri used transmission electron microscopy, a technique in which a beam of electrons is transmitted through an ultra-thin material, to confirm the crystalline properties.

The merger of both experimental techniques with theoretical modeling yielded an unexpected result for the researchers: the bonding of the graphene to the platinum nanoparticles was unusual, according to Thibado.

“Because it is so strong and flexible, graphene typically wraps itself around the material that it is bonding with,” Thibado said. “In this case, the bonding with the platinum was completely different, more like a pyramid.”