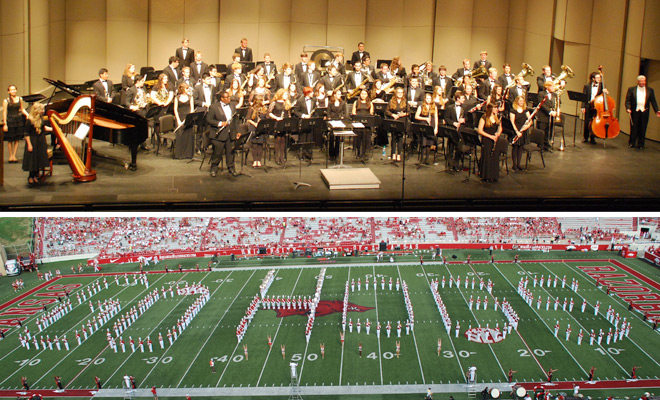 The University of Arkansas Wind Symphony with conductor W. Dale Warren (above); The Razorback Marching Band in their GO HOGS formation (below)

FAYETTEVILLE, Ark. – The University of Arkansas Bands Program will host auditions for prospective members throughout the spring semester.  Incoming freshmen as well as current students are encouraged to audition for the program’s four concert bands and the Razorback Marching Band, also known as the RMB.

“Between early January and mid-March, we will hear almost 275 auditions by prospective RMB members,” said Chris Knighten, director of university bands.  “While almost all of them have been admitted to the University of Arkansas by the time they audition, some students have been admitted to several institutions and still have not made their final decision about college.  These auditions allow us to hear each student play their instrument, but more importantly, they give our band faculty and staff the opportunity to make a personal connection with prospective students and their family members.”

The program will host five days of auditions for prospective non-music majors between February and April.  Prospective music major auditions are scheduled by the band office on an individual basis. The Razorback Marching Band Color Guard and Majorette line will also host auditions on Saturday, April 5, and Saturday, April 12, respectively.

“While visiting campus for their audition, many students are able to have a campus tour, sit in on a concert band rehearsal, become familiar with our outstanding rehearsal facilities in the Lewis E. Epley Jr. Band Building, or attend a Razorback basketball game with the Hogwild Band,” said Knighten.  “We want our prospective students to know that their involvement in the Razorback Band family begins as soon as they first arrive to audition.”

More information on the program’s spring audition season can be found at the University of Arkansas Bands website or by calling 479-575-4100.