New Study of Fossil Teeth Shows That Environment, as Well as Diet, May Impact Dental Wear 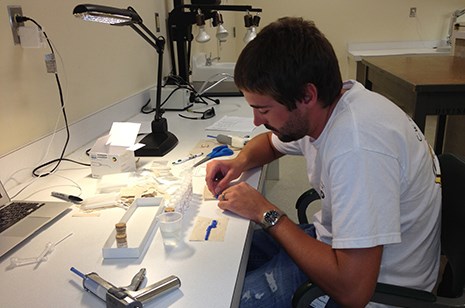 The paper, “A preliminary analysis of dental microwear as a proxy for diet and habitat in shrews,” will appear in the February 2014 issue of Mammalia. Ungar described the finding as an “interesting and unexpected result” that may, with further study, help researchers isolate signs of environmental wear on teeth and changes in environmental wear over time.

“If we see differences in environmental wear on the teeth of animals, we can use that information to say something about the environment of our distant ancestors,” Peter Ungar said. “And that becomes important, because human evolution is related to changes in the environment, and this has the potential to help us learn more about human evolution and what caused it.”

The paper, which is based on Withnell’s honors thesis, is the first study to focus on dental microwear in shrews, which are small mouse-like mammals.

“We chose shrews because their diet is fairly uniform and they’re low to the ground, so they’re coming into contact with soils,” Withnell said. “They seemed like good candidates for determining how much grit load impacts microwear.”

Withnell and Ungar traveled to the National Museum of Natural History in the Smithsonian Museum system in Washington, D.C., where they painstakingly collected dental casts of 300 tiny shrew incisors (an entire jaw of a shrew will fit on a dime with room to spare). Their sample, winnowed to 133 specimens, drew from nine shrew species whose habitat ranged from desert to rainforest and whose diets varied slightly, with some species supplementing the staple of insects with plant matter and vertebrate tissues.

Upon close examination under a microscope, Withnell found few microwear differences between species with differing diets and habitats. He did, however, find subtle variation in dietary microwear when he focused on three species in the grassland habitat.

“The fact that you can’t separate as well on the basis of diet without controlling for environment is important – that tells us that the environment plays a role, that it’s adding noise to the system,” Ungar said.

The U.S. National Science Foundation and the University of Arkansas Honors College provided grant funding for the project.

Future studies that focus on dental microwear among different species of shrews in another habitat, such as forests, may help in isolating the environmental impact on teeth, Withnell said. He is currently beginning graduate studies in evolutionary anthropology at Arizona State’s Institute of Human Origins, renowned for the 1974 discovery of Lucy, a 3.2 million-year-old hominid skeleton.

Ungar is moving forward with several honors students on different permutations of Withnell’s work, including an exploration of dental wear in rodents.

“There are lots of routes forward,” Ungar said. “The question is, how far can we take this technology, and what can it help us understand at the finest level? We know that diet effects tooth wear; what else does?”

Shannon Servoss, associate professor of chemical engineering, and Suresh Thallapuranam, professor of biochemistry, will co-direct undergraduate research at the university.

$4 Million in Federal Grants To Support Transportation and Diversity Initiatives

An honors thesis by Sam Carroll demonstrating farmers can significantly reduce water use while maintaining crop yields has earned him a spot in a peer-reviewed journal.

Preston Jones intends to feature a deep dive into the dark events that took place in November 1978 when more than 900 Americans died at Jonestown, Guyana. The class will be 9:30-11:30 a.m. Oct. 12.