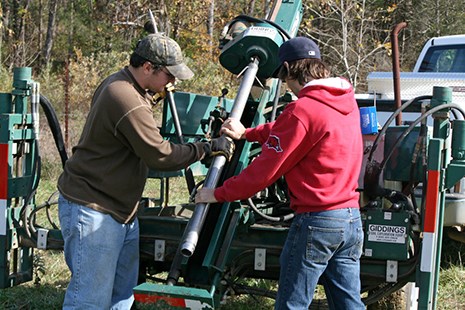 Members of the Big Creek Research and Extension Team work with a soil probe to extract a soil core for nutrient and physical analysis on a permitted manure application field. (U of Arkansas System Division of Agriculture photo).

FAYETTEVILLE, Ark. – Researchers conducting an in-depth examination of a controversial hog farm in the Buffalo River watershed have been employing ground-penetrating radar, grid soil-sampling and water-monitoring devices as they lay groundwork for the multi-phase, long-term study, according to a report submitted to the governors’ office.

The Big Creek Research and Extension Team, comprised of faculty and staff from the University of Arkansas System Division of Agriculture, is conducting the research using funds from the governor’s office. The funding was approved by a legislative subcommittee last September. Site work on the study began in October.

The first quarterly report was delivered Jan. 31 to the Arkansas Department of Environmental Quality and the Arkansas governor’s office. The report laid out team members and their plan of action for the study.

“The study will provide scientifically rigorous information on any potential impacts of the farm on Big Creek, including levels of bacteria, and nutrients such as phosphorous and nitrogen,” said Dr. Andrew Sharpley, team leader and professor at the University of Arkansas System Division of Agriculture.

Sharpley is an international authority on the impacts of agriculture operations on water quality and soil.

Major tasks in the study include:

“Understanding the soil and geologic features below the fields on this farm, and the surrounding area, as well as how water behaves within them will be critical because of the sub-surface complexities resulting from the karst nature of the underlying bedrock geology that makes up the Ozark Plateau,” said Dr. Kristofor Brye, a team member and professor of applied soil physics and pedology for the University of Arkansas.

“Differential weathering can create sub-surface cracks, channels, or even caves throughout the areas underlying limestone, sandstone, and shale bedrock geologies that can enable water to flow rapidly to and through underlying chert layers, in what is often referred to as the vadose zone.”

In the first quarter, the researchers used ground-penetrating radar, or GPR, to begin revealing a profile of the underlying geology and any potential for water movement through the ground. The GPR results are preliminary and extensive soil coring will be done to better understand its meaning for the fields tested. The team also conducted detailed grid soil sampling from three representative farm fields among those with permits allowing for manure application.

“Grid soil samples tell us how variable the soil nutrient levels are and whether there are hot spots near the surface, and how much is already in the soil down to the bedrock underlying these fields,” Sharpley said. “We must understand the baseline landscape in order to monitor both surface and underground movement of nutrients in the most reliable and rigorous manner possible.”

Weekly water samples were taken up- and down- stream from the farm and the team installed monitoring equipment at strategic points on the farm to continuously measure flow rates, as well as nitrogen, phosphorous, E. coli, and other dissolved or suspended solids.

During the second quarter, the team will continue to collect water and soil samples and will bring on-line newly installed monitoring sites and equipment.

In addition, Sharpley said steps were being taken to ensure the team’s work would be publicly available and undergo peer review.

“A website is being developed for the project that will inform those interested of our activities, progress, and findings,” he said. “As part of a public land-grant university system, all of our work is transparent and science-based.”

C&H Hog Farm was granted a permit to operate by the Arkansas Department of Environmental quality. In August, the Buffalo River Watershed Alliance, Arkansas Canoe Club, National Parks Conservation Association and Ozark Society filed a federal lawsuit against USDA and the Small Business Administration that says, in part, that the agencies approved the loan guarantees “without taking the requisite hard look at environmental impacts, notifying and engaging the public” required by the National Environmental Policy Act.

Download a PDF of the Big Creek quarterly report.