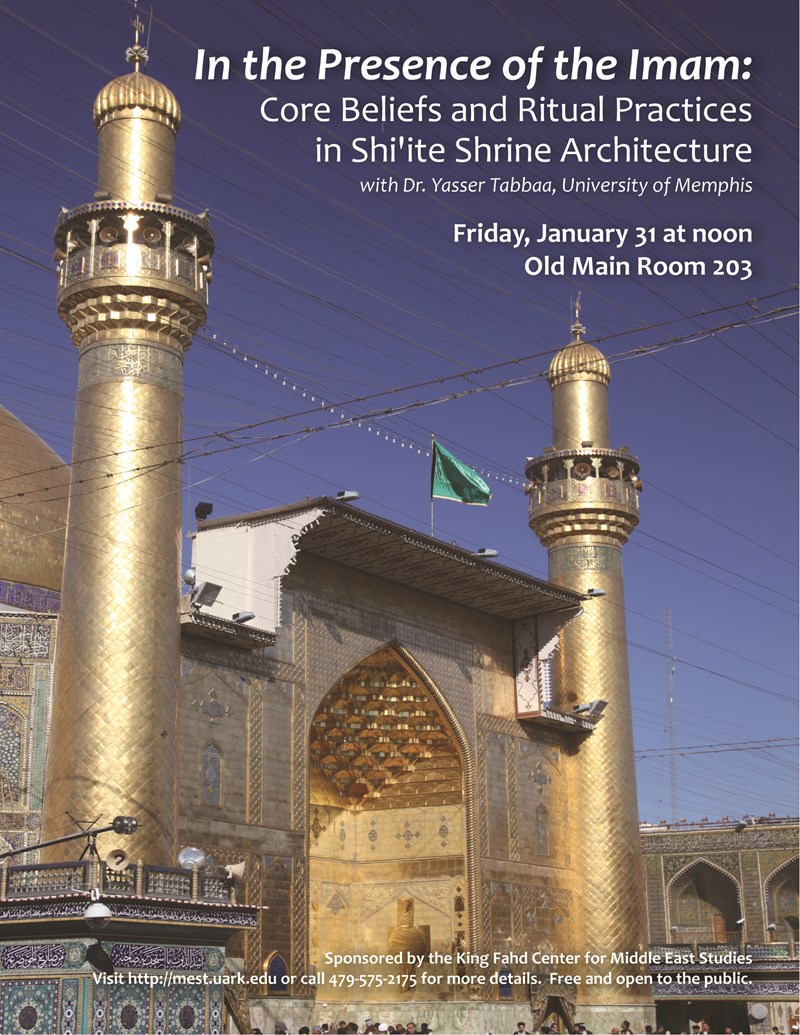 "In the Presence of the Imam: Core Beliefs and Ritual Practices in Shi'ite Shrine Architecture", a special guest lecture by Yasser Tabbaa, will take place on Friday, January 31st at noon in Old Main Room 203.

The King Fahd Center for Middle East Studies is pleased to announce “In the Presence of the Imam: Core Beliefs and Ritual Practices in Shi'ite Shrine Architecture,” a special guest lecture by Yasser Tabbaa, professor of art history and the Dorothy Kayser Hohenberg Chair of Excellence at the University of Memphis. The lecture will take place at noon Friday, Jan. 31, in Old Main Room 203 on the University of Arkansas campus, and is free and open to the public.

Tabbaa has held numerous grants and curated and consulted for numerous exhibitions in the United States, Europe and the Middle East. His research has focused on Islamic architecture and institutions between the 11th and 15th centuries, historical and contemporary Shi`i shrines, calligraphy and ornament, the architecture and poetics of gardens, and the Crusades as cultural encounter.

He has authored two books, Constructions of Power and Piety in Medieval Aleppo (1997) and The Transformation of Islamic Art during the Sunni Revival (2001); a third, Najaf:  City of World Cultural Heritage, is currently in press for UNESCO. He has also published numerous articles, book chapters, and essays.

His lecture at the University of Arkansas will be based on his current book project, titled In the Presence of the Imam: Architecture, Ritual, and Representation in Shi’i Shrines. The question of a specifically Shi’i aesthetic within Islamic art has been vigorously debated in the past two decades, some scholars rejecting it as disruptive of  pan-Islamist essentialism and other admitting it on strictly formalist grounds that dismiss any cultural associations.

Disengaging this question from its essentialist and formalist tethers, this paper asks not so much whether there are essential Shi’i descriptors in Shi’i architecture, but whether Shi’i shrine architecture responds or corresponds to fundamental tenets of Shi’ism that are rooted in past practice but also alive in the present. This presentation will examine Shi’i shrines with special emphasis on those in Damascus and Najaf, against normative and widely accepted Shi’i core beliefs and ritual practices.