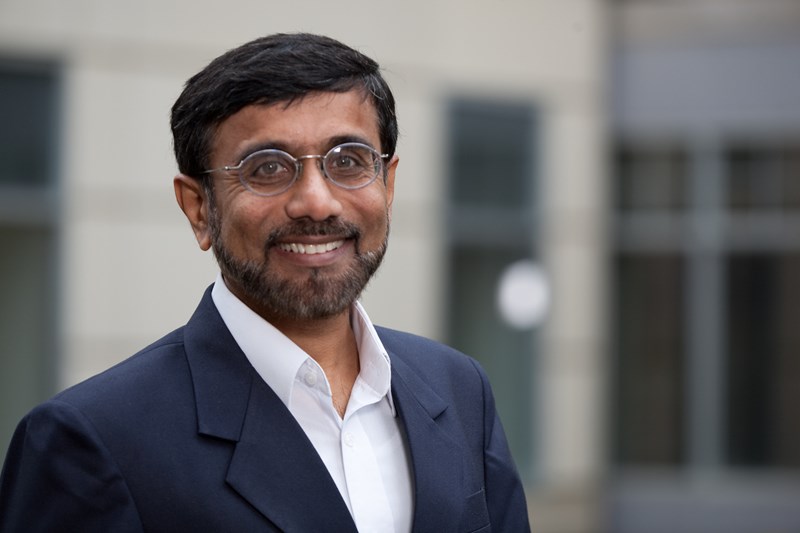 FAYETTEVILLE, Ark. — Hameed Naseem, a professor of electrical engineering at the University of Arkansas, has been named a fellow of the National Academy of Inventors.

Naseem is the first faculty member from the university to be elevated to fellow status by the academy. He and nearly 150 other fellows in the class of 2013 will be recognized with a full-page announcement in The Chronicle of Higher Education on Jan. 17, 2014, and in forthcoming issues of Inventors Digest and Technology and Innovation – Proceedings of the National Academy of Inventors.

Election to NAI Fellow status is a high professional distinction accorded to academic inventors who have demonstrated a highly prolific spirit of innovation in creating or facilitating outstanding inventions that have made a tangible impact on quality of life, economic development and the welfare of society, according to the academy.

“I was really pleased to hear that I had been elected fellow of the National Academy of Inventors,” said Naseem, who is named on eight issued patents to the U of A and was initiated into the academy last spring. “This recognition is a great honor for me, as all my academic life I have emphasized the awakening the ‘inventor spirit’ in my graduate students. In all my patents and patent applications students are co-inventors with me.

“The University of Arkansas provides a research environment conducive to quality research and a very supportive technology licensing office,” he said.

Naseem, who came to the U of A in 1985, directs the campus’ Photovoltaics Research Lab. Through the last two-and-a-half decades he and his graduate students have found ways to increase sunlight-to-electricity conversion efficiency and reduce the cost of expensive materials needed for solar-cell production.

The U of A is a charter member of the National Academy of Inventors, a nonprofit organization founded in 2010. In December, the academy named 143 innovators, including Naseem, to NAI Fellow status.

Collectively, the new fellows hold more than 5,600 U.S. patents. Included in the 2013 class are nine Nobel laureates, 69 members of the National Academies, 23 fellows of the American Association for the Advancement of Science and 23 fellows of the Institute of Electrical and Electronics Engineers.

The NAI Fellows will be inducted on March 7 during the third-annual Conference of the National Academy of Inventors in Alexandria, Va., at the U.S. Patent and Trademark Office headquarters. A plaque listing the name and institution of each NAI Fellow will be on permanent display at the patent and trademark office.

“The 2013 NAI Fellows and their creative accomplishments showcase the continued excellence of academic innovation and invention,” said Paul R. Sanberg, president of the National Academy of Inventors.  “Their work has brought great benefit to the world and we are proud to honor them as fellows.”

The complete list of NAI Fellows can be found here: http://academyofinventors.com/search-fellows.asp.

U of A faculty and staff members traveled throughout south Arkansas last week to present diplomas to some of the recent graduates who earned degrees in online programs.

Glade, program coordinator of the Communication Sciences and Disorders Program, will succeed Michelle Gray, who has been in the honors director role since 2015.

Meredith Neville-Shepard, teaching associate professor in the Department of Communication in the Fulbright College of Arts and Sciences, has been awarded a 2022 Research Development Grant from the Organization for Research on Women and Communication. (ORWAC).

The deadline to renew for men's and women's basketball is Thursday, June 30.

Participants Needed for a Nutrition Study

The Department of Food Science and the Center for Human Nutrition is recruiting adults between the ages of 23-65 years to participate in a nutrition study related to time-restricted feeding.