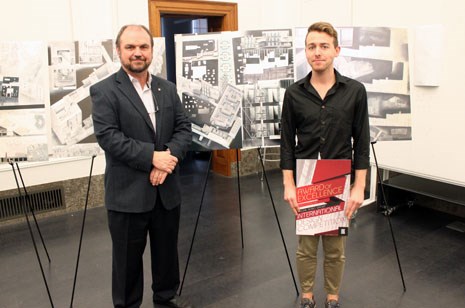 Brady Duncan, a fifth-year student from Little Rock, won the Award of Excellence and a $3,000 prize for a design created during his required study abroad semester working in the school’s Mexico City studio.

Devin Eichler, a fifth-year student from Austin, Texas, won the Award of Merit and a $1,500 prize for a design he created during his semester at the University of Arkansas Rome Center.

The $5,000 in total prize money was awarded by Hnedak Bobo Group, the Memphis, Tenn., architecture firm that also helped judge the submissions. Mark Weaver, a partner and principal architect with the firm and a 1982 graduate of the Fay Jones School, coordinated the competition. Allison Hinson, a recruiter for Hnedak Bobo Group, and Amanda Martinson Boxman, an intern architect and 2007 graduate of the school, joined Weaver at the Oct. 30 awards ceremony in the Young Gallery of Vol Walker Hall during a lunch hosted by the firm.

“HBG’s participation in the international design competition has been a way for us to stay connected to the university and to stay abreast of current thoughts and trends in architectural education and design,” said Weaver, also a fellow of the American Institute of Architects. “Serving as competition jurors also has become an exciting outlet for our architectural staff, and we look forward to seeing all of this creative work every year.”

Rudzinski, director of the 2013 Mexico Summer Studio, said this year’s small group of students made the investigations more pointed and personal. After traveling for three weeks through southern Mexico, the group settled in the Casa Barragan Studio Annex in Mexico City and began working on the studio proposal. This year, they also worked loosely in conjunction with a non-profit architectural group, Casa Vecina, in the La Merced barrio, a historic center of commerce in downtown Mexico City.

“The Mexican students volunteering for the Casa Vecina proved valuable guides to our group in understanding the area under investigation,” Rudzinski said. “Our students then brought their knowledge of Mexican urban space to bear on the design of a hotel and related public space for shop owners from the city’s outskirts who shop in the barrio for goods to stock their stores.” The winning designs take traditional Mexican typologies and transform them for a very contemporary use.

The Rome experience immerses students in the life of the city, said Laura Terry, Rome studio coordinator. The studio course is enhanced by the Architecture of the City course, in which students are provided with the historical, theoretical and cultural background to understand the urban conditions that exist. The studio work investigates the order of urban space through analysis and synthesis.

In the fall semester, students worked at an existing site, the old Ministry of Finance at the EUR, to provide solutions for re-use and re-inhabitation. In the spring semester, the students studied the paths of Sixtus V and proposed design solutions at various points along it.

“Working in the city is challenging due to the complexities of scale and context, but the historical layers of ancient Rome present another set of issues the students must address,” Terry said. “The studio and the Architecture of the City course work in tandem to engage the students with these difficult issues. I have heard again and again from students that their semester in Rome is where all of the issues of architecture and history finally start to make sense.”

Weaver said that with Duncan’s project, the architecture was developed with clear intentions, and presented in a dynamic composition, with drawings that were beautifully detailed and rendered. As one Hnedak Bobo Group jury member noted, “The connected yet separate experience becomes an expression of the market itself. The design conceptually speaks to the discrete urban memory of perpetual transience and becomes both a part of and apart from the city.”

The Fay Jones School jury agreed regarding Duncan’s project, with one member commenting, “This project stood out from all others. It is an appropriate urban response, suggests a strong architectural solution and is beautifully presented as well.”

Weaver said that Eichler’s project “offers a clear, intended solution to Pope Sixtus V’s goals to have a congregation space. It is a clear solution to reorient a ‘gateway’ entry to the city of Rome.”

A Fay Jones School jury member noted that Eichler’s design solution “reimagines Sixtus V’s organization of the city, creating an intervention that is sympathetic with the architectural language and urban fabric of the Eternal City while still asserting its own design sensibility.”