Repetition in Music Pulls Us In and Pulls Us Together 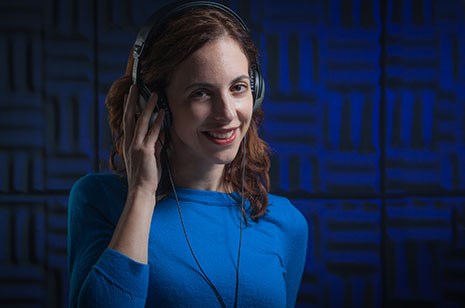 FAYETTEVILLE, Ark. – In On Repeat: How Music Plays the Mind, Elizabeth Hellmuth Margulis of the University of Arkansas explores the psychology of repetition in music, across time, style and cultures. Hers is the first in-depth study of repetitiveness in music, which she calls “at once entirely ordinary and entirely mysterious” and “so common as to seem almost invisible.”

Repetition in music can be a motif repeated throughout a composition or a favorite song played again and again. It can be the annoying earworm burrowed into the brain that just won’t go away.

Music, she writes, “is a fundamentally human capacity, present in all known cultures, and important to intellectual, emotional and social experience.” And repetition is a key element in music, one that both pulls us into the experience and pulls us together as people.

In her research, Margulis drew on a range of disciplines, including music theory, psycholinguistics, neuroscience and cognitive psychology, to examine how listeners perceive and respond to repetition. She worked with ethnomusicologists to understand the place of music and its repetitive features in cultures around the world.

On Repeat is published by Oxford University Press. The Kindle version is available already, and the hardback publication will ship on Nov. 11, 2013.

A repeated musical motif can build pleasurable expectations in the listener, pulling them into the experience of the piece of music.

“Repetition makes it possible for us to experience a sense of expanded present, characterized not by the explicit knowledge that x will occur at time point y, but rather a déjà-vu-like sense of orientation and involvement,” Margulis writes.

Through repeated playing, a work of music develops an important social and biological role in creating cohesion between individuals and groups. Margulis points to children in nursery school singing a cleanup song each day or adults singing Auld Lang Syne at midnight on New Year’s Eve.

“Repeatability is how songs come to be the property of a group or a community instead of an individual,” she writes, “how they come to belong to a tradition, rather than to a moment.”

On Repeat offers new insights into the relationship between music and language, the nature of musical pleasure and the cognitive science of repetition in music. While the book will be useful to scholars and students, it is written for specialist and non-specialist alike.

Elizabeth Hellmuth Margulis is associate professor of music in the J. William Fulbright College of Arts and Sciences at the University of Arkansas.

The initial impetus for the book came in 2009 from an invitation to present a Distinguished Lecture on the Science and Technology of Music at the Centre for Interdisciplinary Research in Music, Media, and Technology at McGill University in Montreal, Canada.

Her research was supported by the music and psychology departments at the University of Arkansas. In 2011-2012, the Fulbright College made it possible for her to spend a year at Wolfson College and the Centre for Music and Science at the University of Cambridge. During the summer of 2011, she was a Fellow at the National Endowment for the Humanities Summer Institute on Ethnomusicology and Global Culture at Wesleyan University in Connecticut.