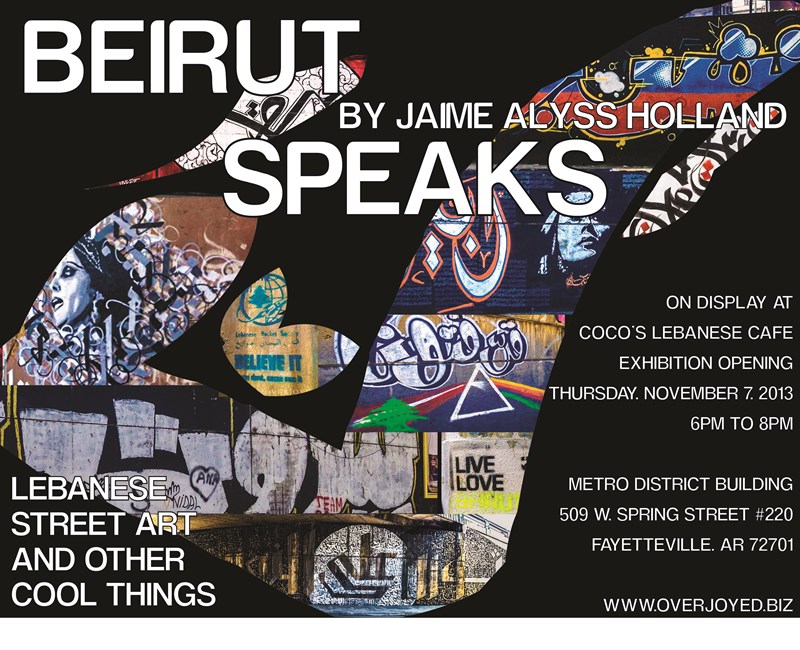 Beirut calligraffiti, based on Arabic letters and calligraphy is claimed to be the first of its kind in the world.

FAYETTEVILLE -- "Beirut Speaks", a photography exhibit by Jaime Alyss Holland, will be on display beginning November 7th at Coco's Lebanese Café, located off Dickson Street in Fayetteville (509 W Spring Street #220).  An opening reception will be held from 6- 8 p.m. Nov. 7.

"Beirut Speaks" is a group of photos that chronicles the contemporary street art scene in Beirut, Lebanon. During field research in Beirut during summer 2013, Holland encountered a small but significant group of street artists that have developed their own unique style of street art, distinguished from Western and European graffiti, and based on Arabic letters and Arabic calligraphy. This style, referred to as calligraffiti, is claimed to be the first of its kind in the world.

"The messages in the street art use satirical humor to purposefully execute questions about their country, without necessarily finding an alternative or answer," Holland explained. "With that, the artists want to challenge and empower their audiences to be aware of their country's current political order and to understand that Lebanese citizens play a role in their society."

These Lebanese street artists feel that calligraffiti makes messages more accessible to Lebanese people than would the use of the Latin alphabet. The artists share the conviction that the use of the Arabic script in graffiti is providing Lebanon with the identity they feel it needs, because it is not borrowed from elsewhere. "Writing Arabic letters in an artistic way, they believe, makes the Arabic alphabet special for a new audience and generation, and the messages of the graffiti have a greater impact because they can be read and understood by Arabic speakers," Holland said.

Jaime Alyss Holland is a cultural anthropology masters student specializing in  Middle Eastern, particularly in Lebanonese, art and aesthetic, and popular culture. She received a BFA in graphic design from Arkansas State University in 2010 and works as a free-lance designer and founder of Overjoyed Art and Design. The title of her thesis is "Beirut Speaks", and is under the supervision of  Ted Swedenburg. Her research addresses the appropriation of Arabic calligraphy and script in graffiti and graphic design in Lebanon, as well as discussing how this street-art is provocative reaction to sectarianism and other socio-political topics. This summer she undertook research in Lebanon as a recipient of the Summer Research Grant from the King Fahd Center for Middle East Studies.

This exhibit is free and open to the public. Professionally mounted prints of the photographs will be available for sale.

For more information about the exhibit, contact Jaime Holland at 870-995-2069 or jaime.alyss@gmail.com