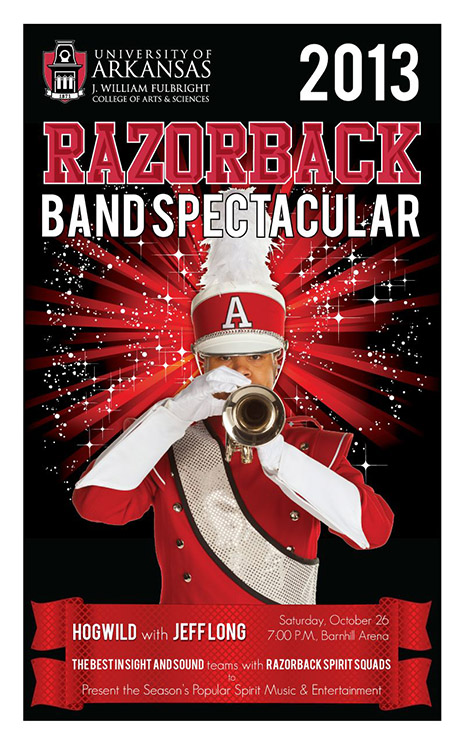 “The Razorback band spectacular allows us to showcase the talent of our dedicated student musicians,” said Benjamin Chamberlain, director of athletic bands. “We are also excited to honor Jeff Long as our guest conductor for his contributions in representing our university and state in leading our athletic department with integrity and success.”

The band, joined by University of Arkansas mascots, cheerleaders and spirit squad, will play music from its 2013 marching season including the Beatles Show and Bond Show along with fan favorites such as the Arkansas Fight Song, Arkansas Swing March and the William Tell Overture.

Long was recently named the first chairman of the College Football Playoff Selection Committee. He was also named an Under Armour Athletics Director of the Year by the National Association of Collegiate Directors of Athletics.

More than 340 band students perform at each home Razorback football game, and the HogWild Band supports basketball and volleyball. The University of Arkansas has the one of the nation’s largest marching bands. The bands program, part of the department of music in the J. William Fulbright College of Arts and Sciences, has student members representing every college within the university.

This family friendly event is free of charge and tickets are not required.