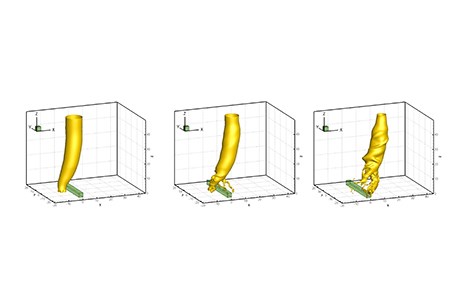 This illustration – stills taken from a computer animation of computational fluid dynamics – shows the disruptive effect of a hill on a tornado’s vortex.

FAYETTEVILLE, Ark. – Using 3-D computer models, University of Arkansas researchers have demonstrated the influence of hills on tornadoes. Their models revealed that the height of a hill and the size of a tornado’s vortex have a significant effect on the tornado’s destructive power. The findings could be used to identify safer areas for construction.

The researchers found that lower levels of a tornado’s vortex are significantly disrupted if the height of a hill is equal to or greater than the radius of the vortex. The models also confirmed an important finding from a previous field study – that wind velocities are significantly reduced on the leeward side of hills.

“A preliminary observation from this study indicates that there is a region behind a hill where velocities are reduced due to disruption of the tornado vortex,” said Panneer Selvam, professor of civil engineering. “Of course this disruption depends on the height of the hill, as well as tornado size and velocity. We measured this effect in scenarios in which the width of the hill was perpendicular to the direction of the tornado.”

Selvam and civil engineering graduate student Piotr Gorecki used computational fluid dynamics, a widely used method to study the effect of wind on structures, to create 3-D computer models showing the interaction of hills and tornadoes. The study was conducted to reveal the influence of the hill height on the tornado-hill interaction. Three different rectangular hill heights – 12, 24 and 36 meters – were investigated, although each hill had the same width and length. For each study, the size of the tornado’s vortex – diameter of 8 meters – was the same, as was its maximum velocity – 86.5 meters per second.

Selvam and Gorecki’s simulations revealed that tornado-hill interaction depends on the ratio of a tornado’s radius to the height of a hill. If a tornado’s radius was equal to hill height, the lower levels of the tornado’s vortex were significantly disrupted during the interaction. This contributed a low-velocity region on the leeward side of a rectangular hill. In this region, the researchers found, wind speeds were reduced by at least 41 percent compared to the maximum tornado velocity, the speed at which it was traveling when it hit the hill.

The results showed that the tornado flowed smoothly over the 12-meter hill, the cylindrical shape of its vortex preserved through the entire interaction. At this height, the tornado adjusted to the minimal change in altitude and maintained its strength as it traveled over the hill.

Selvam said the best sheltering abilities would be on the leeward side of bigger hills. This would require a further, historical investigation of the direction from which most tornadoes travel at a given location. For example, most tornadoes that hit southwest Missouri, including the massive EF5 tornado that struck Joplin, Mo., on May 22, 2011, travel from the west to the east.

Selvam previously found that large structures can reduce the force of a tornado vortex. That research showed that tornado forces are reduced if the side of a building is larger than the vortex diameter.

Earlier this year Selvam and a different graduate student released findings of the first field investigations of the effect of terrain elevation changes on tornado path, vortex, strength and damage. They analyzed Google Earth images of the 2011 Tuscaloosa, Ala., and Joplin tornadoes and found tornadoes cause greater damage when they travel uphill and less damage as they move downhill.

That study also revealed that whenever possible, tornadoes tend to climb toward higher elevations rather than going downhill. They also reported that when a region is surrounded by hills, tornadoes skip or hop over valleys beneath and between these hills, and damage is noticed only on the top of the hills.

The results of the field study and the 3-D computer models study were presented at the 12tth Americas Conference on Wind Engineering.