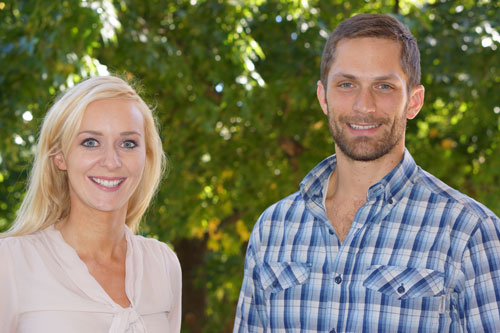 Research conducted by University of Arkansas students Anna Egalite and Jonathan Mills found that the use of private school vouchers by low-income students in Louisiana positively affected racial integration of the schools involved.

Egalite and Mills are education policy doctoral students in the College of Education and Health Professions. They published their findings in the journal Education Next, a publication of Harvard University, Stanford University and the Thomas B. Fordham Institute.

The Louisiana Scholarship Program provides public funds for low-income students in low-performing public schools to enroll in local private schools. Egalite and Mills found that the transfer of students caused by the voucher program improved the racial makeup of Louisiana schools.

“We find that transfers made possible by the school-choice program overwhelmingly improve integration in the public schools that students leave, bringing the racial composition of the schools closer to that of the broader communities in which they are located,” Egalite and Mills wrote.

The Times-Picayune of New Orleans reported on the students’ study of the Louisiana Scholarship Program, which is the target of a lawsuit by the U.S. Department of Justice. The government claims the voucher program is impeding federal school-desegregation efforts initiated in the 1970s.

In the schools under federal desegregation orders, transfers improved integration in both the sending schools and the private schools that received the transfer students, Egalite and Mills found. About 90 percent of the students who used the vouchers to enroll in private schools were African American.

The students set integration benchmarks for individual schools based on the racial composition of their geographic location according to the U.S. Census Bureau.

“So, we could look at the question, ‘Does a student’s transfer move a school closer or farther from that benchmark?’” Egalite said. “If a student leaves a school where he is over-represented, then he improves that school’s racial makeup.”

“For example, if an African American student leaves a school that is more African American than its surrounding community, we would say that this transfer has improved integration at the prior school,” they wrote. “On the other hand, if a white student uses an LSP (Louisiana Scholarship Program) voucher to attend a school that is more white than its surrounding community, the transfer would be reducing integration at the new school.”

The pair was able to include about 800 students in their evaluation after applying several filters to the group of 5,000 who used vouchers.

“One of the filters was the test data,” Mills said. “If they didn’t take the standardized tests, we couldn’t include them. We assume that the students without test data don’t have different experiences than the students with test data.”

That restriction was necessary because they were using the state’s assessment database to identify a voucher user’s previous school and not all students take state assessments every year. Their study covered the 2012-13 school year, which was the program’s initial year of statewide operation.

University of Arkansas professor Patrick Wolf, who holds the Twenty-First Century Chair in School Choice, is conducting a six-year evaluation of the Louisiana voucher program, the first statewide program his School Choice Demonstration Team has evaluated. Six voucher programs previously evaluated by the team were all based in urban areas. Wolf and Jay Greene, who holds the Twenty-First Century Chair in Education Reform, are co-principal investigators of the Louisiana evaluation.

Egalite and Mills asked to use the student-level data to examine the effect on the racial balance of schools as part of the research for their dissertations. Egalite is in her fourth year of the program and is done with her coursework. She is writing her dissertation about the broader effects of the Louisiana voucher program.

Mills is in the third year of the program and plans to write his dissertation on how the Louisiana Scholarship Program affects the educational outcomes for students.