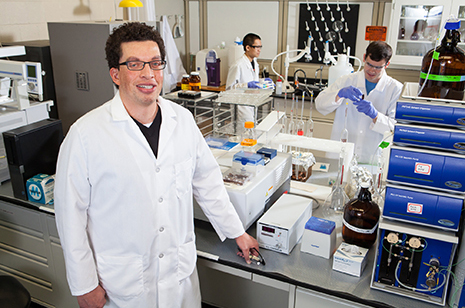 Julian Fairey directs the Water Research Laboratory at the University of Arkansas.

FAYETTEVILLE, Ark. – Scientists at the University of Arkansas will spend the next two years developing an activated carbon that could lead to cleaner, safer drinking water in Oklahoma’s second-largest city.

Julian Fairey, an assistant professor of civil engineering and director of the university’s Water Research Laboratory, said the goal of the project is to improve Tulsa’s drinking water by decreasing the formation of regulated disinfectant byproducts. These chemicals are formed as an unintended consequence when drinking water is disinfected — organic matter present in source waters reacts with disinfectants such as free chlorine or chloramine to form the disinfectant byproducts.

Since the 1970s, scientists have identified more than 600 of these byproducts, many of them suspected carcinogens.

“It’s exciting,” Fairey said. “Any time we can work with water utilities — that’s a way of helping consumers. Ultimately that’s why we do the research, to help improve the quality of drinking water in U.S. drinking water systems. Working directly with utilities is the best way to impact drinking water quality on a daily basis, and that’s a great thing.”

All drinking water sources contain natural organic matter, derived from algae, land plants, soil and other natural substances. While particulate matter settles out during typical treatment processes, tiny particles called colloids remain in the water and react with free chlorine to form disinfection byproducts such as trihalomethanes and haloacetic acids, which are regulated by the U.S. Environmental Protection Agency.

In collaboration with Wen Zhang, an assistant professor of civil engineering at the U of A, researchers will analyze the chemistry and biology of Tulsa’s water at different stages of the drinking water treatment process. They will systematically modify the surface chemistry of the granular activated carbons — which filter chemicals dissolved in water — to enhance the absorption of the natural organic matter that serves as precursors to trihalomethanes and haloacetic acids, Fairey said.

The research, to be conducted in the Water Research Laboratory in the College of Engineering, is being funded through a $156,000 grant from the Tulsa Metropolitan Utility Authority.

Fairey, an environmental engineer, works on applied research projects to develop new technologies that will reduce the risks posed by pollutants in sediments and drinking waters.

In 2012, Fairey received a National Science Foundation Faculty Early Career Development Award. The award, known as a CAREER award, is one of the highest honors given by the foundation to junior faculty members.