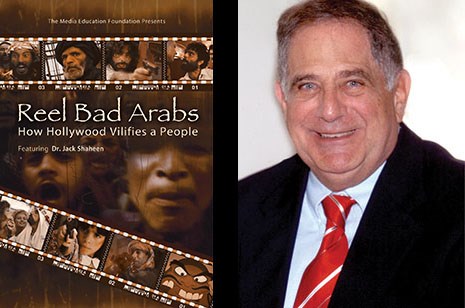 FAYETTEVILLE, Ark. – Internationally acclaimed author and media critic, Jack G. Shaheen will present “American Images of the Middle East: Problems and Prospects” at 7 p.m. Thursday, Sept. 19, in Giffels Auditorium in Old Main. Additionally, Shaheen will take part in a screening and discussion of his documentary Reel Bad Arabs at 7 p.m. on Wednesday, Sept. 18, in Mullins Library Room 104. Both events are free and open to the public.

His presentations are sponsored by the King Fahd Center for Middle Eastern Studies at the University of Arkansas.

The documentary is an extension of Shaheen’s book by the same name which analyzes the depiction of Arab and Muslim characters in Hollywood from the earliest days until the present. Shaheen has cataloged virtually every film and TV program and analyses the degree to which stereotypes have shifted or remained constant.

Shaheen is the author of Nuclear War Films, Arab and Muslim Stereotyping in American Popular Culture, The TV Arab and the award-winning book and film Reel Bad Arabs: How Hollywood Vilifies a People. His writings also include 300-plus essays in publications such as Newsweek, The Wall Street Journal and The Washington Post in addition to chapters on media stereotypes in various college textbooks. He recently donated his vast personal collection of pop-cultural artifacts to New York University.

Shaheen is a recipient of two Fulbright teaching awards and has given over 1,000 lectures in nearly all the 50 states and on three continents. He has appeared on national network programs such as CNN, MSNBC, National Public Radio, Nightline, Good Morning America, 48 Hours, and Today , discussing media stereotypes. Shaheen previously served as a CBS consultant on Middle Eastern affairs and as a consultant with several film and TV companies. The Pittsburg native holds degrees from the Carnegie Institute of Technology, Pennsylvania State University and the University of Missouri.

The King Fahd Center for Middle East Studies is an academic and research unit in the J. William Fulbright College of Arts and Sciences at the University of Arkansas. It is an interdisciplinary and interdepartmental area studies center that offers diverse cultural, intellectual, and educational opportunities for the University of Arkansas community. The center promotes research and teaching in interdisciplinary Middle East studies.