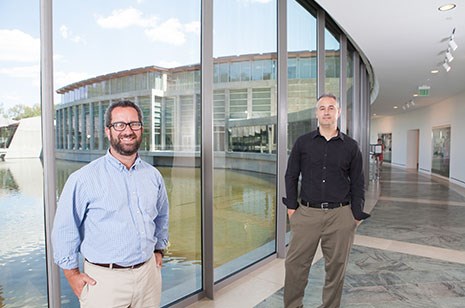 BENTONVILLE, Ark. – Researchers in the College of Education and Health Professions at the University of Arkansas found that field trips to cultural institutions have significant benefits for students beyond educational aspects.

“We found that students who attended a school tour at Crystal Bridges demonstrated stronger critical thinking skills, displayed higher levels of tolerance, had more historical empathy and developed a taste for being a cultural consumer in the future,” said Jay Greene, one of the researchers. “We also found that these benefits were much larger, in general, for students from rural areas or high-poverty schools, as well as minority students.”

“This research is the first large-scale, randomized, controlled trial measuring what students learn from school tours of an art museum,” Kisida said during the announcement Monday morning at Crystal Bridges.

The journal Education Next, a publication of Harvard University, Stanford University and the Thomas B. Fordham Institute, published an article Sept. 16 with the findings. The study is part of a larger research initiative that Greene and Kisida are pursuing to shed light on the effects of arts and culture in education. The research offers implications for everyone from parents to policymakers.

A $10 million gift to the museum from the Willard and Pat Walker Charitable Foundation of Springdale provided funds for school groups to visit the museum, including transportation, substitute teachers, lunch and educational materials.

Each school visit includes a one-hour guided tour of the museum’s permanent collection, a discussion and activity session around a theme and lunch at the museum’s restaurant. Teachers are able to choose from several themed tours, each designed to connect with Common Core standards at a variety of grade levels in art, history, social studies, language arts and sciences.

“Since Crystal Bridges is in an area where an art museum had not previously existed, and because the field trip is free to schools, we had high demand for the tours and decided to select participants via a random lottery,” said Anne Kraybill, Crystal Bridges’ school programs manager. “In initial meetings with the University of Arkansas, it became clear that this lottery system would provide the right conditions for conducting research.”

Crystal Bridges received 525 applications from school groups representing 38,347 K-12 students during the first two semesters of the school tour program. Greene, Kisida and Bowen matched pairs among the applicants based on similarity in grade level and other demographic factors. Within each pair, the researchers randomly assigned which applicant would be in the “treatment group” – the group that would receive a tour that semester – and which would be in the “control group,” whose tour would be deferred to a later time.

The researchers administered surveys to all of the students several weeks after the students in the treatment group visited the museum. The surveys included multiple items that assessed knowledge about art, as well as measures of tolerance, historical empathy, critical thinking and sustained interest in visiting art museums and other cultural institutions.

“Our research suggests that students actually retain a great deal of factual information from their tours, as students who received a tour of Crystal Bridges were able to recall details about the paintings they had seen at very high rates,” Greene said.

For example, 88 percent of the students who saw the Eastman Johnson painting, At the Camp – Spinning Yarns and Whittling, knew when surveyed weeks later that the painting depicts abolitionists making maple syrup to undermine the sugar industry, which relied upon slave labor. Among students who saw Thomas Hart Benton’s Ploughing It Under, 79 percent could recall that it is a depiction of a farmer destroying his crops as part of a Depression-era price support program.

The researchers assessed students’ critical thinking skills by showing all third- through 12th-graders a painting they had not previously seen and asking them to write short essays in response to two questions: “What do you think is going on in this painting?” and “What do you see that makes you think that?”

Overall, the researchers found that students assigned by lottery to a tour of the museum improved their critical thinking skills relative to the control group. For rural students (who live in towns with fewer than 10,000 people), students from high-poverty schools (those with more than 50 percent receiving free or reduced-price lunches) and minority students, the effect was two to three times larger.

“Culturally enriching field trips are in decline in public education, and museums across the country report a steep drop in school tours,” Greene said. “This research shows that the trips have significant benefits and particularly for disadvantaged students. These results should be an important consideration in the assessment and distribution of resources.”