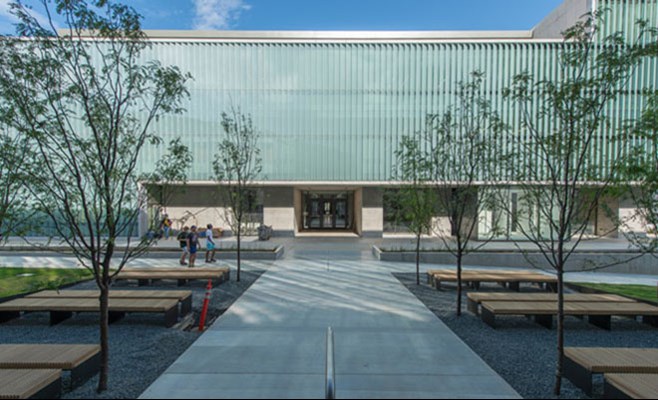 A view of the western facade of the Steven L. Anderson Design Center addition 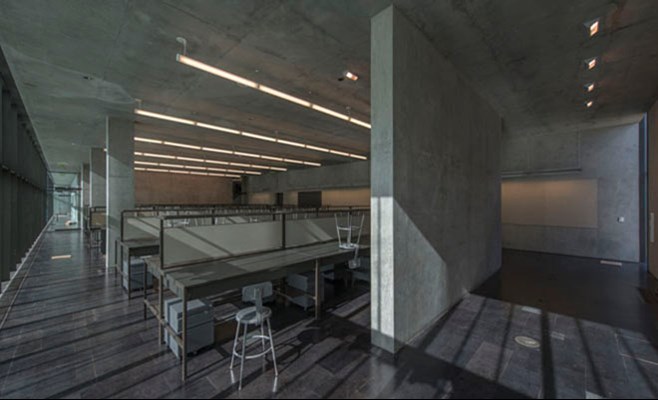 A studio in the Anderson Design Center. 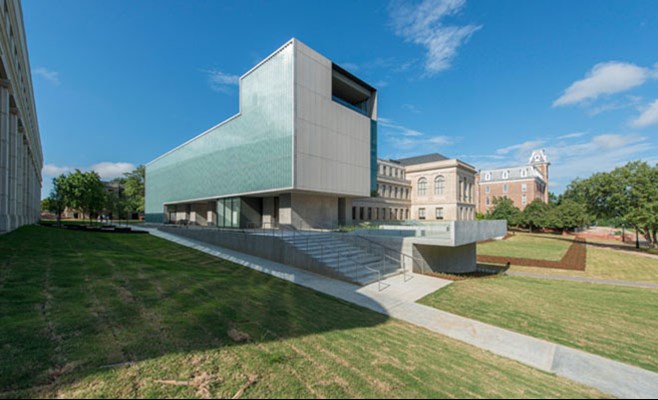 A view from the southwest of the Anderson Design Center. 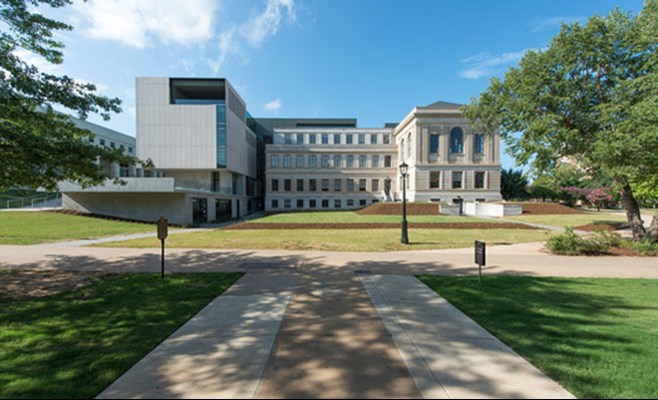 A view from the south of the. Anderson Design Center. 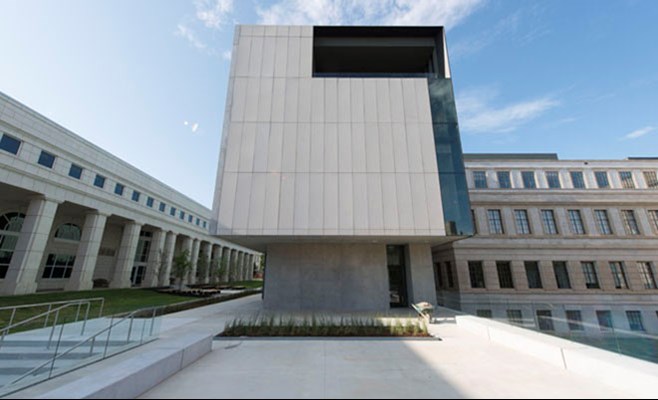 The sky terrace of the Anderson Design Center. 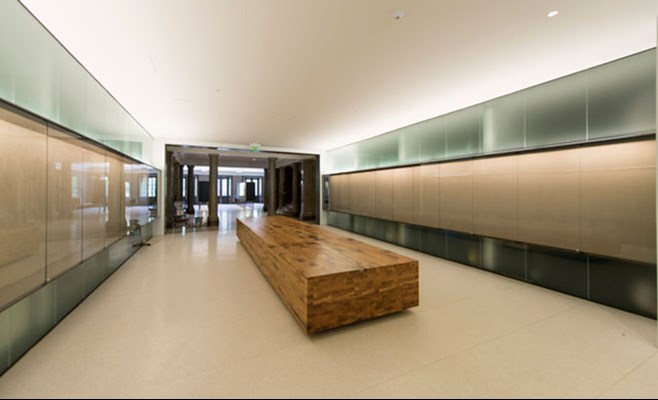 A wooden tableau in the new central corridor on the main floor of Vol Walker Hall. 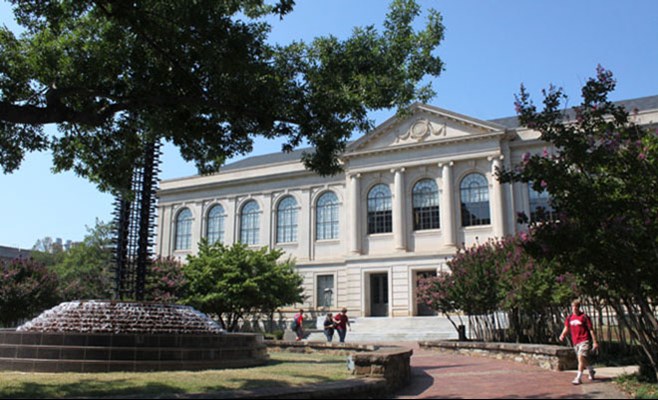 A view of the east side of the renovated Vol Walker Hall, home to the Fay Jones School. 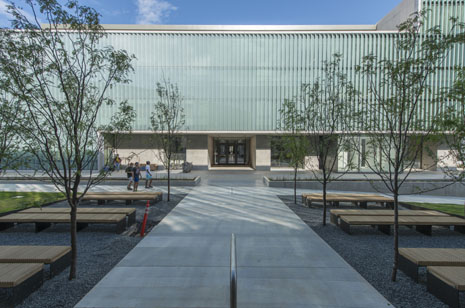 West public plaza and the west facade of the Steven L. Anderson Design. (All photos by Will Burks)

FAYETTEVILLE, Ark. – The Fay Jones School of Architecture at the University of Arkansas celebrated the completion of a construction project more than three years in the making. The renovated Vol Walker Hall and the new addition, the Steven L. Anderson Design Center, were rededicated and dedicated, respectively, at a 4:30 p.m. ceremony on Thursday, Sept. 12, on the west side of the addition.

In 2010, the Donald W. Reynolds Foundation donated $10 million to name the addition to Vol Walker Hall the Steven L. Anderson Design Center, honoring Anderson, foundation president and a 1976 graduate of the Fay Jones School’s architecture program. The U of A also contributed $19.8 million toward the project, an example of how the campus facilities fee is being used to help pay for deferred maintenance and renovation for specific capital improvements.

“As our student population grows, so too must our facilities,” said Chancellor G. David Gearhart. “These capital improvements will greatly enhance the educational experience of the students in the Fay Jones School of Architecture and provide a much-needed update to an important building on our campus. We are appreciative to the Donald W. Reynolds Foundation and its chairman, Fred Smith, whom we’re also honoring today, for their investment in our facilities. We’re also thrilled to have Mr. Anderson’s name associated with our design programs.”

Also on hand to speak at the event were Ethel Goodstein-Murphree, interim dean of the Fay Jones School; Steven L. Anderson, president of the Donald W. Reynolds Foundation; Katie Anderson, his daughter and a 2012 Fay Jones School graduate with a Bachelor of Interior Design; and Brandon Bibby, a fifth-year architecture student.

“Having my name forever connected to the Fay Jones School of Architecture is an incredible honor,” said Steve Anderson. “I am grateful to the University of Arkansas for the excellent education I received, as well as to the Donald W. Reynolds Foundation for their contribution toward this world-class design facility. It has been a privilege to be involved with both of these organizations.”

The 34,320-square-foot design center addition is made from limestone panels, steel, architectural concrete, Arkansas white oak and glass. Added to the 56,635 square feet in Vol Walker Hall, the total space in the building is now 90,955 square feet. According to current estimates, the project cost was a little more than $36.6 million. About 54 percent of that total went toward the renovation of Vol Walker Hall, with about 46 percent going toward the addition.

This state-of-the-art facility – which includes several design studios, a computer lab, a design shop, a 200-seat lecture hall, a securable exhibition gallery, student and faculty lounge areas, and a green roof – will help enhance and expand the already top-notch education provided by the school’s faculty and administration.

As the university moves forward toward the goal of becoming one of the nation’s top 50 public research universities, the Fay Jones School already has gained a solid reputation. The architecture program was ranked 19th in the nation, and eighth among public universities, in a survey by the Design Futures Council, published in DesignIntelligence in 2012. The school also tied for the No. 1 ranking in a national survey of “top brands” in architectural education, also conducted by the Design Futures Council, in two categories: “Top for Regional Respect and Admiration” and “Best Small School Design Program.”

“Few building types wield as much power in shaping the made environment as a school of architecture,” said Goodstein-Murphree. “Such a building is an incubator for its students, the emerging professionals who will be entrusted with the profound task of creating, and editing, the historic built environment – determining what will be saved and what will be sacrificed. Together, the Steven L. Anderson Design Center and Vol Walker Hall demonstrate best practices in both contemporary design and historic preservation.”

Vol Walker Hall was built in 1935 as the university’s library. Since 1968, it has served as home to the architecture school, although some programs of the school have been located in other campus facilities during that time.

The renovated historic building, plus the significant addition, allows the school, for the first time, to accommodate the faculty and students of all three disciplines – architecture, landscape architecture and interior design – along with support staff, in a shared space. This will finally allow the Fay Jones School to have a clear, cohesive identity as a design school. Collaboration also will be enhanced in this combined space. Collaboration is an important part of the school’s strategic plan, and it is a major trend in research and the way professional design firms operate.

The project also serves as an example for design students. In recent years, professional architectural practice has become about 50 percent renovation, preservation and adaptive reuse projects, with the other 50 percent in new construction.

For several years, Fay Jones School officials debated whether to stay on campus or find a remote spot and build everything new. About a decade ago, they decided to stay in their prime location in the heart of campus and build an addition to meet their needs.

Some major contributors in recent years have helped to dramatically change the trajectory of the school. In addition to the Reynolds gift, Don and Ellen Edmondson, clients and longtime friends of Fay Jones, gave $10 million to name the school after Jones, which took effect in 2009. Then, the Reynolds Foundation and the U of A contributed to this transformational construction project.

This building project won a Building Information Modeling Award from the American Institute of Architects for Exemplary Use of BIM in a Small Firm in 2012.