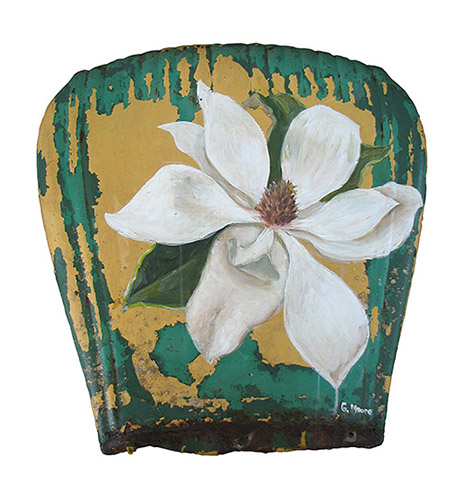 FAYETTEVILLE, Ark. – What do you call trash re-made into treasures? Local artist Gregory Moore calls them “reclaimed surfaces.” Moore’s exhibit of multimedia pieces consist of “found objects,” which are mundane, discarded objects created for a non-art use that he has repurposed into surfaces for his paintings.

“Reclaimed Surfaces” is on display in the lobby area of Mullins Library through the end of October.

Moore paints on pieces of rusted, dented metal in ways that do not obscure their original texture and color. He seeks objects that are unique in their configurations of stains, rust and damage and allows those characteristics to guide each painting. He is interested in what man-made debris reveals about the nature of “the outside.”

“Because these scraps have been rejected, they function as a reminder of our collective shadow,” explained Moore. “Because they undergo processes that our human bodies could not withstand, they bear witness to dramas and stories that go on outside of our daily awareness.”

Moore’s approach to his subject matter is largely informed by the detritus with which he begins. Often, he evokes or reimagines the scene where decaying trash might be found. When he began painting on found objects, the images that emerged were weeds and wildflowers. Now the metal guides him into more diverse imagery and an eagerness to be increasingly playful with color and imagination. Pieces in this exhibit include a polar bear painted on an air conditioner panel, flowers and thistles painted on metal seats and barrel lids, a whale painted on pieces of wood, and dogwood blossoms painted on an elevator panel. Moore hopes that these works provoke thought about the richness and complexity of elements we might otherwise ignore.

Gregory Moore moved to Arkansas from Northern California in 1997 to attend John Brown University in Siloam Springs, where he studied graphic design. He lives in Fayetteville and works as an art director for a local marketing firm. His paintings on found objects have been shown at regional and national galleries, and he currently serves on the board of the Fayetteville Underground artists collective. Moore’s artwork has appeared in several national publications including New American Paintings and truthout.com.