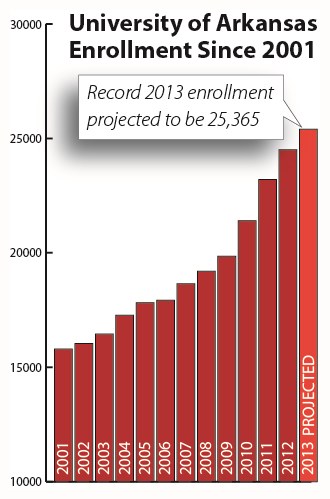 FAYETTEVILLE, Ark. – Preliminary enrollment figures at the University of Arkansas show the flagship campus now has a total of 25,365 students, Chancellor G. David Gearhart announced at a news conference Friday morning, Aug. 30. The increase reflects a growth in the number of both undergraduate and graduate students, but it also shows a steady improvement in both academic quality and diversity.

“This is a great time to be attending the University of Arkansas,” the chancellor said. “We have grown bigger, better, smarter and more diverse than ever before. Our reputation as a high-quality, nationally prestigious university is attracting outstanding students throughout Arkansas, across the United States, and all around the world. At the same time we have firmly established ourselves as the school of choice in Arkansas.”

U of A administrators had earlier envisioned enrollment of 25,000 students as a goal they hoped to reach by 2021, the university’s sesquicentennial. Since 2008, however, University of Arkansas enrollment has increased by 32 percent – more than 6,000 students. This growth trend led the Chronicle of Higher Education to rank the U of A as the 13th fastest-growing public research university in the country.

Provost Sharon Gaber pointed out that the university has worked hard not only to increase enrollment, but to provide the growing number of students with the resources they expect.

“We’ve spent the last several years expanding our capacity to educate students,” Gaber said. “We’ve had an estimated $450 million in new construction since 2011 to renovate, expand and modernize our campus. New faculty members are also being added at a pace commensurate with growth. Since 2010, we have added 60 additional tenure track and 100 non-tenure track positions with an expectation that more will be added in the next fiscal year. Growth at the University of Arkansas will not come at the cost of quality interaction with an instructor.”

Undergraduate and graduate student enrollment are both up this year, according to the preliminary numbers. Suzanne McCray, dean of admissions and vice provost for enrollment management reported that there are a record 21,083 undergraduate students enrolled on campus, a 4 percent increase over last year, and a 27 percent growth over the last six years. She said that continuing students make up a significant part of this growth, a good sign for improved retention.

“We are as excited by the quality of our students as we are by the numbers,” McCray said.

“The percentage of new students with a high school GPA of 3.75 or higher is at a record high of 43.5 percent; 17.7 percent of our freshman class has an ACT score of 30 or higher, a new record for the university. And the number of AP credit hours that students are bringing with them has increased this year by 25 percent,” she said.

McCray explained that the university’s determination to enroll students who are prepared to succeed academically is a major factor in improving retention and graduation rates.

Graduate student enrollment has also grown to 3,904 students, the largest one-year increase in several years. Since 2006, graduate student enrollment has increased by 16 percent. Provost Gaber credited the work of Todd Shields, dean of the Graduate School and International Education and his staff. She said that improved recruiting and efforts to work with the other colleges and graduate faculty to attract high-quality graduate students are key to the growth and essential for the university’s goal of becoming a top 50 public research university.

Diversity on the University of Arkansas campus has also shown significant improvement. Charles Robinson, vice chancellor for diversity and community, said that the preliminary enrollment figures show that 4,474 minority students enrolled at the U of A, an 80 percent increase since 2008.

“This is a mark of just how well the university’s efforts to reach out to underrepresented students across the state are paying off,” Robinson said. “Commitment to diversity means helping to prepare students for college while they are still in high school. It means providing the academic support services first-generation college students need to succeed. It means letting them know they are a welcome and a necessary part of the university community.”

Perhaps the greatest single area of growth in 2013 is in online enrollment. Since the appointment of Javier Reyes as vice provost for distance education and the restructuring of the Global Campus, there are now 6,122 students taking at least one online class this semester, a 74 percent increase over last year and a 399 percent increase since 2008.

The current enrollment figures are still preliminary. The official numbers will not be available until after the “11th day snapshot” required by the Arkansas Department of Higher Education. That enrollment data will be analyzed and reviewed for accuracy before a preliminary report is submitted to the department, with the final numbers from that 11th day snapshot officially filed by mid-October.