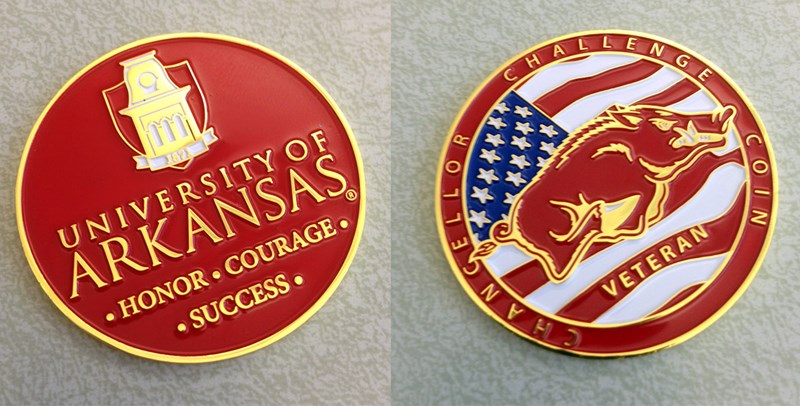 FAYETTEVILLE, Ark. – For U.S. military veterans the transition from service member to student presents many challenges and obstacles. This year the University of Arkansas will honor its graduating student veterans with a Challenge Coin Ceremony as part of the annual Graduating Student Leaders Breakfast, at 7 a.m. Saturday, May 11.

In the military commanders use these types of coins to improve morale and honor service members for their hard work. It’s commonly believed that the coins originated during World War I as American volunteers from all parts of the country filled the newly formed flying squadrons.

"Service members normally get a thank you for their service when they are in uniform,” said Erika Gamboa, director of the Veterans Resource and Information Center. “However student veterans do not wear a uniform to class. They are just like every other student but their commitment to serving our country is one that should be acknowledged. My hope is that our student veterans and their families know how appreciative we are of their service to our Nation. I believe the Chancellor Challenge Coin is not only a representation of this sentiment but will also serve as a permanent reminder of the university's commitment to the academic and career success of past, current, and future U of A student veterans."

During the ceremony Chancellor G. David Gearhart will present the coins to the graduating student veterans as Daniel Pugh, vice provost for student affairs and dean of students, reads their names. This is the thirteenth year of the Graduating Student Leadership Breakfast but the first year for the Chancellor Challenge Coins. With this ceremony the university joins ten other universities that award Challenge Coins to their student veterans and is the first Southeast Conference school to award the coins.

“This is a very important event for me,” said Gearhart. “It is a privilege to recognize the men and women who have served our country and are now graduating from this institution. There can be no higher calling than protecting our nation. Our student veterans have given far more than we have any right to ask.

Along with the Challenge Coin ceremony, graduating student leaders who have contributed greatly to the Division of Student Affairs will be acknowledge and awarded a medal. The Jenny Runkles Watercarrier Award will also be given to the student who most embodies the spirit of leadership.