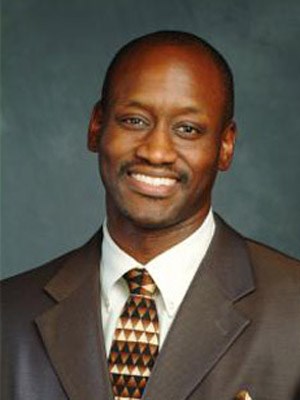 Robinson, 47, is a history professor and currently serves as vice provost for diversity affairs within the university’s division of academic affairs. In the latter role, he serves as one of nine members of the chancellor’s executive committee, the university’s senior policy advisory council.

“Dr. Robinson has a well-deserved reputation as a scholar, mentor and higher education advocate in Arkansas and beyond,” Gearhart said. “This promotion reflects both Dr. Robinson’s leadership within the executive committee and on campus as well as the centrality of his office’s work to the university’s goals and objectives.

“I appreciate Chancellor Gearhart’s decision and the confidence he and Provost Sharon Gaber continue to place in me,” Robinson said. “I have a great respect for them and my colleagues. More important, I have a strong commitment to helping the University of Arkansas provide even greater educational opportunities and resources to the people of our state.”

In his new role, Robinson will continue to lead and coordinate the university's diversity initiatives. Those include facilitating the recruitment and retention of underrepresented students, faculty and staff and enhancing the university’s diverse, multicultural nature and climate. In addition, Robinson will have administrative responsibility for the university’s office of equal opportunity and compliance. He will be one of six vice chancellors advising Gearhart on all campus issues.

“We have made tremendous progress in our diversity efforts in recent years,” Gearhart said. “This promotion reflects a redoubling of our commitment to further expand the U of A’s inclusive and diverse community of scholars.”

Robinson’s 22-year career in higher education began at Houston (Texas) Community College, where he taught for nine years. Since joining the U of A in 1999, he has achieved the rank of full professor of history and has served as director of the university’s African and African American studies program.

In his tenure at the University of Arkansas, Robinson has been awarded the Fulbright College Master Teacher Award, the Arkansas Alumni Distinguished Teacher Award, and the Student Alumni Board Teacher of the Year Award. He has also been cited for excellence and inducted into the university's Teaching Academy. In 2006, Robinson received the Black Students Association’s Lonnie R. Williams Bridging Excellence Award. Robinson also received the Martin Luther King Jr. Lifetime Achievement Award from the MLK Council of Northwest Arkansas.

Robinson has published three scholarly works: Dangerous Liaisons: Sex and Love in the Segregated South; Forsaking All Others: Interracial Love, Violence, Betrayal and Revenge in the Post Civil War South; and Remembrances in Black: Personal Perspectives of the African American Experience at the University of Arkansas, 1940s-2000s. In addition to his scholarly pursuits, Robinson has self-published a historical fiction, Engaging Missouri: An Epic Drama of Love, Honor and Redemption across the Color Line.

Robinson and his family reside in Elm Springs, Ark.