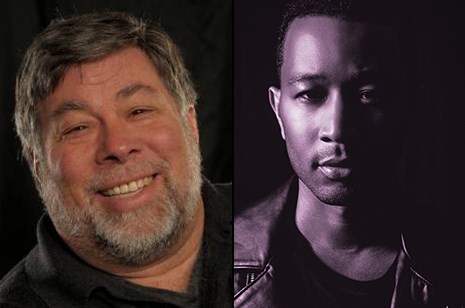 FAYETTEVILLE, Ark. – The co-founder of Apple Computer Inc., Steve Wozniak, and a Grammy Award-winning singer, songwriter and producer, John Legend, have been chosen to speak as part of the student-sponsored Distinguished Lecture Series at the University of Arkansas in April.

Both men are known for their philanthropy and concern for students and education, as well as for their professional achievements.

Wozniak, who designed and built the Apple I and Apple II, making him instrumental in launching the personal computer revolution, will speak at 7 p.m. Sunday, April 7, in Barnhill Arena. The lecture is free and open to the public. No ticket is needed.

John Legend is known as an award-winning singer and songwriter, who has sold millions of albums worldwide. He is also an activist who uses his name and his resources to promote education and sustainability, and to support programs that combat poverty and the spread of HIV/AIDS. He will speak about those issues – and also perform four songs as part of his presentation – at 7 p.m. Monday, April 29, in Barnhill Arena. This event is also free, open to the public, and no ticket is required.

The Distinguished Lecture Series is a student-sponsored program. Speakers are chosen by a committee of students, faculty and staff, and the events are funded by a student-approved fee, appropriated by the Programs Allocation Board.