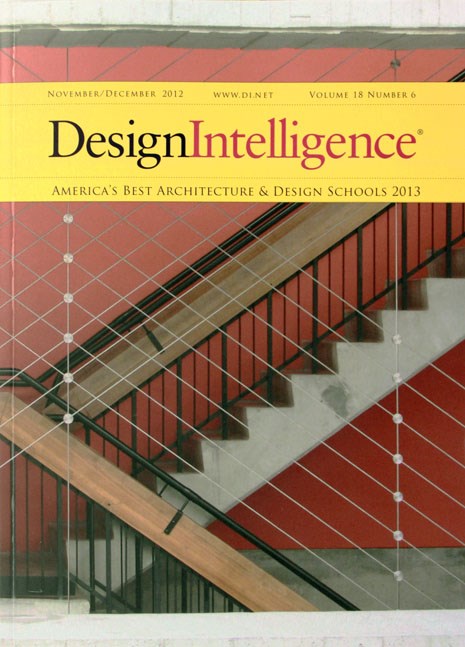 The Fay Jones School of Architecture is twice ranked No. 1 in a national survey of “top brands” in architectural education, according to a survey in the November/December 2012 issue of DesignIntelligence.

FAYETTEVILLE, Ark. – The Fay Jones School of Architecture is twice ranked No. 1 in a national survey of “top brands” in architectural education, according to a survey conducted by the Design Futures Council. The results are published in the November/December 2012 issue of DesignIntelligence.

The Fay Jones School was included in this survey of the “top brands,” a sampling of architecture school brand strengths based on surveys and interviews by DesignIntelligence editors. The school tied for No. 1 in the nation in the “Top for Regional Respect and Admiration” category, sharing that distinction with California Polytechnic State University in San Luis Obispo and the University of Oregon. The Fay Jones School also tied for No. 1 in the nation in the “Best Small School Design Program” category, sharing that with Rice University and the University of Wisconsin-Milwaukee.

“We are very pleased to receive this recognition. It is a clear indication of the quality of our faculty, staff and students, and of the great work they do,” said Jeff Shannon, dean of the Fay Jones School.

The Fay Jones School is also ranked 19th in the nation in the 13th annual survey of “America’s Best Architecture and Design Schools,” a study conducted by the Design Futures Council and also published in the November/December 2012 issue of DesignIntelligence. The survey lists the top 20 undergraduate architecture programs for 2013.

In addition, architecture professor David Buege was selected as one of the “30 Most Admired Educators for 2013.” The DesignIntelligence staff solicited input from design professionals, academic leaders and students. They said Buege “brings a clarity and consistency of rigor, focus and exploration to his work with faculty, administration and students. He has become well known for high standards and getting the best out of each person he works with. He makes the difficult easier to understand.”

The top 20 undergraduate architecture programs for 2013, as listed by this recent report by James P. Cramer, editor of DesignIntelligence, have distinguished themselves over time on the basis of rankings by professional firms, architecture deans and chairs and student evaluations, among other criteria.