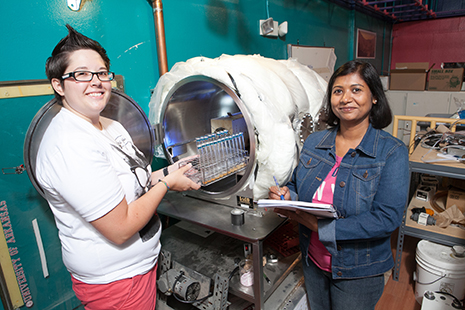 FAYETTEVILLE, Ark. – A team of University of Arkansas researchers recently received a three-year grant worth $391,675 from the NASA Exobiology Program to study methanogens-- among the simplest and oldest organisms on Earth -- and if they could survive on Mars.

“These are some of the oldest and most prominent organisms on our planet,” said Tim Kral, professor of biological sciences in the Arkansas Center for Space and Planetary Sciences and lead scientist on the project. “We use these as models for life on Mars. What this means is, we study them under Martian conditions to see if they could currently exist on Mars as a native life form. That’s what this proposal is about; it’s looking at the metabolism of methanogens under Martian conditions to see if they could possibly exist up there.”

Since the 1990s, Kral has been studying methanogens and examining their ability to survive on Mars. In 2004, scientists discovered methane in the Martian atmosphere, and immediately the question of the source became an important one.

“When they made that discovery, we were really excited because you ask the question ‘What’s the source of that methane?’” Kral said. “One possibility would be methanogens.”

Kral’s research team includes Dan Lessner, assistant professor of biological sciences and space and planetary sciences, Vincent Chevrier, research assistant professor from space and planetary sciences, Rick Ulrich, professor of chemical engineering, and graduate students Rebecca Mickol and Navita Sinha. For the current project they will place four different species of methanogens in an environmental simulation chamber housed in the Space Center’s W.M. Keck Laboratory. They will drop the pressure to six millibars, the surface pressure of Mars. For comparison, the surface pressure of Earth at sea level is about 1013 millibars. By decreasing pressure, the scientists can determine if and at what rate these anaerobic beings will grow at Martian pressures.

“These organisms are strict anaerobes, so they’re killed by oxygen, and these chambers are not perfect,” Kral said. “When you have a very low pressure, you’re going to have the atmosphere sneak in there, and our atmosphere is 20 percent oxygen. Even though you can continue to pump down the chamber to whatever pressure you want, oxygen is getting in there. We have to overcome that problem because they [the methanogens] are extremely sensitive, so if you want them actively growing, you have to have a way of keeping that oxygen out.”

The team will also analyze how organisms behave under the extreme Martian temperatures and exposure to ultraviolet radiation. Scientists believe that life requires the presence of water. The average surface temperature for Mars in the middle latitudes is -50 degrees Celsius, well below the freezing temperature of pure water. However, salts and other compounds in the water can lower the freezing point to a temperature that would allow liquid water to be present for a short period of time in a given day on or slightly below the Martian surface.

Even if the organisms pass the water test, another hurdle awaits. Unlike Earth, Mars does not have a strong magnetic field to protect it from the deadly solar radiation emitted from the Sun. The high-energy ultraviolet radiation poses a serious risk to life on the surface of the planet. The question then is how much ultraviolet radiation these organisms can tolerate and for how long. The interdisciplinary science team hopes to help answer that question by exposing the methanogens to varying amounts of radiation both in aerobic, anaerobic, wet and dry conditions, as well as on different analogs to Martian soils. Through their experiments, they also hope to evolve methanogens with some resistance to the radiation.

“The planet is constantly bombarded with ultraviolet radiation that probably precludes the existence of organisms at the very surface,” Kral said, “but if there are some in the near subsurface, the question is ‘How are they affected by this radiation?’”

As humans continue to ask, “Is there life beyond Earth?”, researchers and graduate students at the University of Arkansas are working diligently to find out what might be able to survive on Mars.