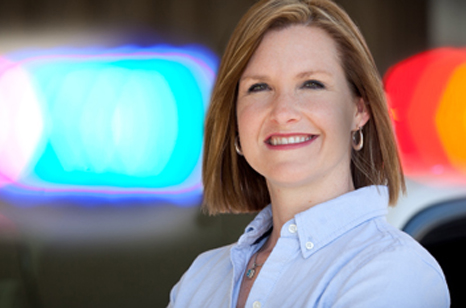 FAYETTEVILLE, Ark. – When it comes to the content of a police report, University of Arkansas doctoral student Leslie Seawright found there is a “huge disconnect” between what police officers deem important and what attorneys and judges expect. Seawright has studied hundreds of police reports and determined that officers would be well served by better training in writing these pivotal documents.

“What I hope prosecutors, in particular, realize is that they need to be more hands-on and involved in the training of officers. If they would go in and explain how these reports are really used, officers would have a better sense of purpose in writing them and know what details are crucial,” Seawright said.

“By taking a detailed look at the demands of reading and, particularly, writing on a police officer, Leslie develops a strong argument for the need to see the work of law enforcement as deeply involved with the social practices of reading and writing,” Jolliffe said.

“Officers want to get in their cars and catch the bad guy, which is absolutely respectable,” Seawright said. “But what they don’t realize is that part of catching the bad guy is crafting the police report for the prosecutor’s case.”

During the course of her research, Seawright discovered that criticisms of police reports differ within the justice system. While police officers and their supervisors are most concerned with the appearance of the document and its professionalism, attorneys complain that proper spelling and punctuation do not win cases.

“Officers describe writing reports as ‘painting a picture’ or ‘telling a story,’ which is a big problem because that whole notion suggests they sort of create the event as they see it,” Seawright said. “They don’t know what details to look for because they’re not thinking like a prosecutor.

“If a report reads, ‘He hit her,’ well how did he hit her? From what angle? With fists? Open fists or closed? The prosecutor will have 15 questions from just that one statement,” she said.

Judges, too, have their own expectations of a police report. They want it to be documented that civil liberties were respected, rights were read and the officer had consent to enter the home. Additionally, information regarding any past history related to the incident can help a judge end what Seawright calls “the judicial merry-go-round” — when a repeated arrestee is never convicted.

“You would be surprised how often reports leave out simple things, like whether there were witnesses on the scene or details on how to find them if witnesses are mentioned,” Seawright said. “Prosecutors end up having to hire additional staff just to track down the information the police reports leave out.”

Seawright, who is married to a former police officer, means no disrespect toward police officers. It was during the course of her graduate studies that her husband served in the police force, and she became “enthralled with how critical this one document is to the entire justice system,” and thus she was perplexed by how little training her husband received in writing it.

“Of the 430 hours of a police officer’s training, only eight hours are spent learning how to write reports,” Seawright said. “Of course safety is most important — learning fighting techniques and to handle weapons — as well as learning about the law and how to not violate a citizen’s rights, but without a comprehensive police report, it’s like the crime never happened.”

Seawright spent hundreds of hours riding with officers on their shifts and witnessing firsthand many criminal incidents and how they translated on paper. She insists that officers are, by nature, not lazy, and that they would be very receptive to suggestions on how to better write their reports. There is potential, she said, for a better working relationship between the officers, attorneys and judges.

Seawright plans to give copies of her dissertation to all the judges and attorneys she worked with over the course of her research, as well as local police academies. Additionally, she said she would love to write a “no-nonsense police report writing guide that gets to the heart of what the reports are meant for,” not merely a grammar book.

“Let’s forget about grammar and professionalism for a second; talk to the prosecutors and judges and figure out how we can improve the overall judicial system,” she said.

Seawright has presented her findings to the University of Arkansas’ graduate student research competition, as well as to the College English Association Conference in St. Petersburg, Fla., and the Expanding Literacy Studies Conference at Ohio State University. She is set to graduate in May with a doctorate in English. Jolliffe is a professor of English and holds the Brown Chair in Literacy in the J. William Fulbright College of Arts and Sciences at the University of Arkansas.