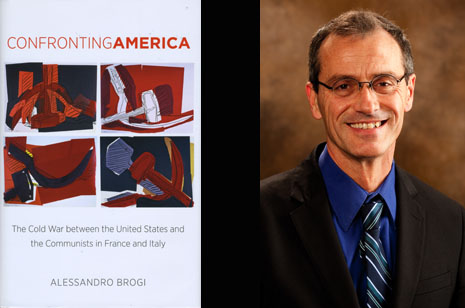 Confronting America: The Cold War between the United States and the Communists in France and Italy, by Alessandro Brogi, associate professor, history, University of Arkansas.

FAYETTEVILLE, Ark. – In Confronting America: The Cold War between the United States and the Communists in France and Italy, University of Arkansas historian Alessandro Brogi uses newly opened archives to examine the complex relationship between the U.S. and two key European allies during the Cold War years.

“This book can make the reader reflect on what is going on today and why the best intentions often fail to predict results, for example in the Middle East,” Brogi said, noting that resentment of the U.S. can be based on “what America is or what America does.”

It is relatively easy to address criticisms of what America does by correcting policies, but it is more difficult to change what America is.

“What America is involves U.S. society, culture and history,” Brogi said. “The criticisms of that whole American experience are naturally more damning; they are sometimes prejudicial, but sometimes stinging because they can be quite perceptive.”

Yet, the Cold War experience with the French and Italian communist parties suggests that a culture of open dissent in the United States can disarm or modulate anti-Americanism.

“Self-criticism does not discredit the United States; it can in fact be its best weapon of influence abroad,” Brogi said.

Both France and Italy had vigorous and influential anti-government and anti-American opposition from their communist parties. Dealing with such strong communist parties in two allied countries “always caught the United States by surprise,” Brogi said. In his book, he analyzes the resilience of the parties’ anti-Americanism and how effectively the United States countered it.

Based on new evidence from communist archives in France and Italy as well as archives in the United States, Brogi researched America’s nuanced post-war relationships with France and Italy. The U.S. employed both the hard power of military and economic might as well as the soft power of ideology, diplomacy and culture. Resistance to post-war Americanization was crucial to the French and Italian communist parties. While dogmatic, their opposition to Americanization was at times subtle and ambivalent, particularly in relation to the social movements of the 1960s in the United States.

Observing the culture of dissent, Brogi said, “Many French and Italian communists started appreciating the pluralist nature of America. They saw that America could survive the deepest of crises and reform itself. While never fully redeemed in their eyes, the United States at least became fascinating because it was more frank and open about its internal divisions than their own countries were.”

Ultimately, the French and Italian communist parties failed to adapt to the forces of modernization, both within their own countries and from U.S. influence in Europe, according to Brogi.

Brogi is associate professor of history in the J. William Fulbright College of Arts and Sciences at the University of Arkansas. He is the author of two previous books, L’Italia e l’egemonia americana nel Mediterraneo and A Question of Self-Esteem: The United States and the Cold War Choices in France and Italy.