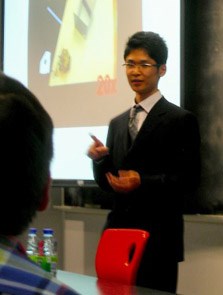 Honors College senior Akihiro Eguchi recently presented papers at back-to-back international conferences on topics ranging from a nuts-and-bolts look at programming and building an inexpensive housecleaning robot to a new finding in game theory based on computer simulations. Eguchi is pursuing dual degrees in computer science in the College of Engineering and psychology in the J. William Fulbright College of Arts and Sciences to achieve his dream of programming artificial intelligence. An Honors College research travel grant and funding from the computer science and computer engineering department supported his travel to Canada and Poland.

Eguchi presented the first paper, “In Search of a Cost Effective Way to Develop Autonomous Floor Mapping Robots,” which he coauthored with fellow computer engineering students Hung Nguyen and Daniel Hooten, at the International Symposium on Robotic and Sensors Environments in Montreal, Canada. That paper grew out of a capstone engineering project to develop a robot that will, in its final version, mop your kitchen or vacuum your living room while you relax with friends.

This has been done before, but current robotic cleaners are costly and inefficient, covering some areas many times, and other areas only once or twice. To build a “smarter” robot, Eguchi wrote a program so that the robot can figure out the most efficient way to map the floor on its first round, ensuring that it reaches all parts of the floor efficiently in its second pass through a room. To control costs, his team used a compass and computer mouse to detect movement, and an off-the-shelf infrared sensor that costs less than $65 in lieu of the $5500 sensor that guides another prototype. “We’re focused on keeping it cheap,” he said.

Eguchi presented a second paper, “Minority Game: the Battle of Adaptation, Intelligence, Cooperation and Power,” coauthored with Hung Nguyen, at the Fifth International Workshop on Multi-Agent Systems and Simulation in Szczecin, Poland. In this paper, Eguchi and Nguyen considered a variant of the El Farol Bar problem, a classic game theory problem in which the players who end up in the minority, win (selling a stock when most people are buying it would be a real-life application of the game). They discussed computer simulations involving four different types of play strategy to determine the best winning strategy and found the most interesting results when considering players who worked as a team. “If all players are honest, they perform worse, because the numbers grow, and minimum decision makers win,” Eguchi said. The liars didn’t always win, however. If honest players are in the minority on the team, then they win. If honest players are in the majority, then the liars win. “This is a new finding, and the reason our paper was accepted,” Eguchi said.

“In my several years of teaching Capstone, few if any students have translated their projects into research papers,” wrote Craig Thompson, a professor of computer science and computer engineering who is directing Eguchi’s work in this area. “Akihiro later asked me to review a paper and I assumed it was the same one but it was entirely different, in a different area, if anything more interesting, and has been written independently of any faculty mentoring. I find this remarkable. Both Akihiro and Hung were top seniors in our department last May, in computer science and computer engineering, respectively.”

Douglas Behrend, a professor of psychology whose research focuses on language and cognitive development in young children, is mentoring Eguchi’s research in psychology.