Oct. 05, 2011
Stephen K. Boss, right, and Brian Platt, left, discuss measurements of dinosaur tracks.
Boss and Platt measure the distance between tracks.
Malcolm Williamson, Stephen K. Boss, Jackson Cothren and Brian Platt stand amid dinosaur tracks.
Malcolm Williamson and Jackson Cothren discuss the laser scanner used to take images of the tracks.
The laser scanner was mounted on a cherry picker to get a birds’ eye view of the tracks.
Alex Hamlin and Ryan Shell paint a dinosaur track with grease to prepare it for plaster casting.
Terryl Daniels, left, lays down a plaster-coated cloth as Joann Kvamme smoothes the plaster down.
Celina Suarez, Terryl Daniels, Stephen K. Boss and Joann Kvamme lift a dry plaster cast.
Suarez examines a rock found at the site where a field of dinosaur tracks was recently discovered.
The tracks of Acrocanthasaurus atokensis head into the bedrock.
Plaster casts of a series of theropod tracks attributed to Acrocanthasaurus atokensis. 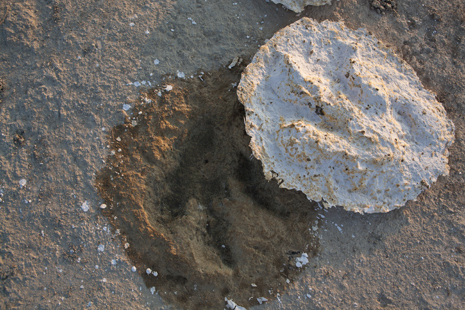 University of Arkansas researchers are examining dinosaur tracks found in southwest Arkansas. They made a plaster casting of this track, which is believed to have belonged to a giant carnivore called Acrocanthosaurus atokensis that lived during the Early Cretaceous.

FAYETTEVILLE, Ark. – The discovery of a large field of dinosaur tracks in Arkansas has researchers busy using cutting-edge technology and traditional techniques to learn all that they can about the animals and environment that existed there 120 million years ago.

The track site, found in southwest Arkansas, covers an area of about two football fields and contains the fossilized tracks of several species and tracks from multiple animals of the same species, some of which have never been previously documented in Arkansas. The site will help researchers learn not only about the creatures that once roamed through the area, but also about the climate during the Early Cretaceous period 115 to 120 million years ago.

“The quality of the tracks and the length of the trackways make this an important site,” said Stephen K. Boss, who led the National Science Foundation-funded project. Based on the rock in which the footprints were found, researchers have a good idea of what the climate would have been like.

“Picture an environment much like that of the shores of the Persian Gulf today. The air temperature was hot. The water was shallow and very salty,” Boss said. “It was a harsh environment. We’re not sure what the animals were doing here, but clearly they were here in some abundance.”

The most dramatic tracks found, those of a three-toed dinosaur, measure about two feet long by a foot wide. The researchers believe the footprints might belong to Acrocanthosaurus atokensis, one of the largest predators ever to walk the earth. The site also contains the giant prints of sauropods, large, long-necked plant-eating dinosaurs such as Pleurocoelus and Paluxysaurus. Other prints pepper the site as well, but it will take scientists some time to determine what other creatures might have walked through that area.

“Through tracks, we can learn all sorts things about dinosaur biomechanics and behavior,” said Brian Platt of the University of Kansas. “Dinosaur bones can be dragged away by animals or swept out to sea. But we know that about 120 million years ago, dinosaurs walked right through here.”

Thanks to a fast-track grant from the National Science Foundation, the University of Arkansas office of research and economic development and the J. William Fulbright College of Arts and Sciences, a team of researchers spent two weeks studying the site, which is on private property. In addition to chisels, hand-held brooms and plaster, some scientists brought along their computers. Jackson Cothren and Malcolm Williamson, researchers from the department of geosciences and the Center for Advanced Spatial Technologies at the university, documented the tracks using LiDAR, short for “light detection and ranging.” They used two different instruments to map the site.

First, they used a Z+F Imager 5006i mounted on a cherry picker. The imager is a phase-based scanner that emits a constant beam of laser light, which is swept across the landscape to measure and record up to 500,000 points per second.

The second unit, used to record an overview of the site from the ridge above, is a Leica ScanStation C10. This time-of-flight scanner incorporates discrete pulses of laser light at a rate of 50,000 per second, each recording a point in space. Depending on the path of a given laser pulse, up to four return pulses are recorded by the instrument's receiver. The location where each LiDAR return pulse originated is computed, allowing the researchers to study a three-dimensional “point cloud” representing the tracks.

By using LiDAR, the researchers will be able to view a highly accurate map of the site’s tracks and take detailed measurements of the height, width and depth of individual tracks as well as measurements of the trackways. These measurements will help them learn details about the animals’ identities, movements and behavior.

While computer imagery can give an overview of the dinosaurs, rock samples from the site can offer clues to climate.

“Because we see footprints here, we know that this surface was at one time exposed to the elements,” said Celina Suarez, a postdoctoral researcher at Boise State University who will be joining the faculty at the University of Arkansas in the fall of 2012. This exposure means that scientists can learn information about the frequency of rain and amount of evaporation that affected this site 120 million years ago. Using this site and others, they can reconstruct a regional paleoclimate during the Early Cretaceous period, which may help them make predictions about Earth’s future climate.

“This site will add to the knowledge of both the animals and climate of the Early Cretaceous,” Boss said. “Scientists will be studying these data for many years.”